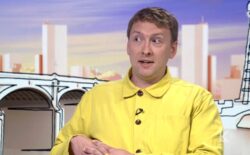 Joe really is the gift that keeps on giving (Picture: BBC)

Joe Lycett has once again proven that he truly is the Christmas gift that keeps on giving.

The 34-year-old comedian has hilariously recreated a video that Catherine Zeta-Jones originally posted, which left some fans pretty baffled.

The Addams Family star had shared a clip of herself having a great time as she sung: ‘It’s Christmas time and I’ve got my karaoke out. Oh yeah, oh yeah.

‘Next to the Gretsch and keyboard. Oh yeah, I’m ready. Bring it on Santa.’

The 53-year-old star had filmed herself looking over the camera and swaying her head before panning it around to her electric guitar and disco lights.

‘I think she’s had a glass or two of sherry,’ one fan had laughed in the comments.

Joining in on the fun, Joe recreated his own version with a towel over his head to make up for Catherine’s hair.

‘It’s Christmas time and I’ve got my cushion with Nicolas Cage on. Oh yeah, oh yeah,’ he sung.

He showed off his Nicolas Cage sequined cushion (Picture: @joelycett)

Referring to his sarcastic adoration of the Conservative Party, he continued: ‘Statue of Theresa May and keyboard. Oh yeah, I’m ready. Bring it on Santa.’

Joe shared clips of a sequined cushion of Nicholas Cage’s face, and his own home-made statue of Theresa May.

‘Who wore it best?’ he captioned the video.

Viewers were of course delighted, with one writing: ‘I live for these’ as another penned: ‘Absolutely smashed it.’


MORE : Joe Lycett has perfect comeback as he responds to criticism for performing in Qatar before David Beckham stunt


MORE : David Beckham’s statement to Joe Lycett was pitiful – it would have been less offensive if he’d kept quiet

Joe really is the Christmas gift that keeps on giving.