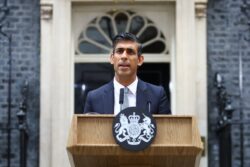 Rishi Sunak has confirmed Jeremy Hunt will remain as chancellor as he kicks off a wave of cabinet appointments expected in the coming hours.

Mr Hunt was widely expected to remain in the Treasury in order to project stability and continuity ahead of a key financial statement on October 31.

Ex-foreign secretary Dominic Raab has also been seen going into Downing Street and is set to be brought back into the fold.

The new prime minister, the third in 50 days, is putting together his top team after being confirmed in office this morning.

He was formally invited to form a government by King Charles at Buckingham Palace less than 24 hours after being elected unopposed as leader of the Conservative Party.

Mr Sunak has moved swiftly to reshuffle the cabinet, getting rid of more than a third of those around the table in an overhaul which has gone further than some commentators expected.

It marks the third time in less than four months that the government has been completely reconfigured under different leaders.

New appointments are expected throughout the day following the sacking or resignation of several ministers, some of whom were loyal to Boris Johnson or Liz Truss.

Business secretary Jacob Rees-Mogg, who campaigned against Mr Sunak in two leadership elections and warned his party last week it was ‘Boris or bust’, has left his role.

Dominic Raab, one of the new PM’s loyalist backers, will be brought back into government (Picture: AFP)

More than one third of those at Liz Truss’ final cabinet meeting this morning have been sacked (Picture: Downing Street)

Ms Truss’ levelling up secretary Simon Clarke, who worked closely with the new PM in the Treasury before turning on him in the summer leadership election, has been ousted.

Chief whip Wendy Morton is also gone, days after Number 10 were unable to clarify whether or not she had resigned over a shambolic ‘confidence vote’ in the House of Commons.

Mr Malthouse’s exit means the crucial department will have a sixth boss in just 13 months.

The new PM was greeted by officials and civil servants after entering Number 10 for the first time (Picture: Downing Street)

All eyes will now be on whether recognisable former ministers like Priti Patel, Michael Gove and Suella Braverman are offered a route back to the top table.

Mr Sunak will also need to decide whether to keep Ben Wallace, the popular defence secretary who is closely associated with efforts to support Ukraine.

In his first speech to the country as PM, Mr Sunak paid tribute to his predecessor before vowing to turn the economy around and deliver the 2019 Tory manifesto, warning ‘difficult decisions’ on cuts will be needed.

He said: ‘I admired [Ms Truss’] restlessness to create change. But some mistakes were made.

‘Not borne of ill will or bad intentions. Quite the opposite, in fact. But mistakes, nonetheless.

‘And I have been elected as leader of my party and your prime minister, in part, to fix them.’

Ms Truss gave her farewell speech from the same spot a few hours before. She said: ‘I look forward to spending more time in my constituency and continuing to serve southwest Norfolk from the back benches.

‘Our country continues to battle through a storm. But I believe in Britain, I believe in the British people and I know that brighter days lie ahead.’


MORE : Rishi’s most awkward moments – from ‘Coke addict’ gaffe to ‘no working-class friends’

The new prime minister is overhauling the government after assuming office this morning.