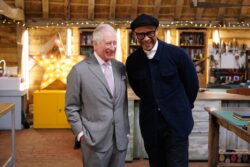 Tonight, to mark the centenary of the BBC, an episode of the beloved TV series featuring the King is set to air on BBC One.

Having been filmed between August 2021 and March 2022 when he was Prince Charles, the segment followed Jay and the rest of the team as they went about mending two objects – a piece of Wemyss Ware made for Queen Victoria’s Diamond Jubilee, and an 18th century bracket clock from the collection at Dumfries House of The Prince’s Foundation in Scotland.

Near the end of the programme, King Charles was welcomed back into the barn to witness the unveiling of the finished restorations.

Having been drinking from a mug labelled ‘HRH’ (with Jay alongside him holding a mug with the letter ‘J’ for his name), the then-Prince of Wales shook the hands of The Repair Shop stars Steve Fletcher and Will Kirk before asking: ‘Have you sorted this?’

Jay poked fun at the royal’s eagerness, piping up to say: ‘Straight in there, he says, “Have you sorted this?” Hold on a minute! Hold on!’

Fortunately, the King took it in good humour, admitting that the ‘suspense’ was ‘killing’ him, in a moment that was captured in the recently-released trailer.

Ahead of the royal Repair Shop episode airing on the BBC, Jay spoke about how special it was to bond with King Charles over their shared interests.

King Charles was hugely enthusiastic to see the results of the restorations (Picture: BBC)

BBC commissioning editor Julie Shaw added: ‘This is an incredibly special programme which has the magic that Repair Shop viewers have come to know and love.

‘People will see the former Prince of Wales as you rarely see him – and he is as captivated by the skills of the team who work on his items as any of our Repair Shop visitors.

‘The episode is a real treat and we hope that people enjoy it as much as we do.’

The Repair Shop: A Royal Visit airs tonight at 8pm on BBC One and BBC iPlayer.


MORE : Jay Blades on how The Repair Shop ‘fixed’ him after experiencing racism, violence, and neglect

The special episode is due to air tonight.