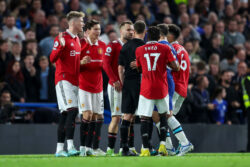 McTominay hauled Armando Broja to the ground in a clear spot kick for the Blues, but United players swarmed around referee Stuart Attwell to try to convince him to change his mind before Jorginho slotted home and Casemiro levelled it up.

O’Hara feels it has become a common occurrence under new boss Erik ten Hag, who arrived at Old Trafford this summer from Ajax.

‘One thing that is winding me up with Man Utd at the minute,’ O’Hara told talkSPORT. ‘You are seeing it every week.

‘When a decision doesn’t go their way, they are surrounding the referee.

‘It is taking minutes [for] the ref [to get them] out the way, just get out the way. It’s a penalty. It’s stonewall. Your player has messed up, deal with it.

ð âYou know one thing thatâs annoying me about #MUFC at the minute?â

ð¡ âWhen a decision doesnât go their way, they surround the ref!â

‘Stop moaning, stop going on about it. I think they got fined the other week for not controlling their players. I’m sick of it, it’s stupid.’

Alan Shearer was infuriated by United players’ antics during their 0-0 draw with Newcastle earlier this month.

United are sixth in the Premier League after their first 11 matches, though they do have a game in hand over fourth-placed Newcastle and will go above them with a victory.

They have recorded impressive wins over Arsenal, Liverpool and Tottenham this term, bouncing back after a dismal start which saw Ten Hag lose his first two games in charge to Brighton and Brentford respectively.

United return to action on Thursday when they host FC Sheriff in the Europa League.

‘You are seeing it every week…’