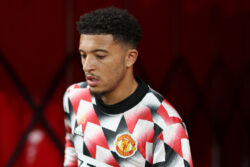 The winger has not played a match in two months (Picture: Getty)

Jadon Sancho is unavailable for selection in Manchester United’s Carabao Cup clash against Burnley on Wednesday evening and is still yet to return to training.

Manager Erik ten Hag revealed last week that the 23-year-old is ‘physically and mentally’ struggling and he was not part of United’s squad for their warm-weather camp in Spain despite not being involved in the World Cup.

Sancho started the season brightly but his form tailed off after he was overlooked for a place in Gareth Southgate’s England squad for the September Nations League matches.

Due to the Premier League hiatus, Sancho has not played in two months and he has been given his own individual fitness programme which he has been working on in the Netherlands.

Now the Manchester Evening News are reporting that the former Borussia Dortmund winger is still yet to return to United’s Carrington training complex ahead of the resumption of the domestic season.

Sancho will play no part against Burnley in Wednesday’s fourth-round tie as a result, while there are serious question marks over his participation – even in a limited capacity – during the busy festive period.

Ten Hag previously said Sancho was ‘not fit enough’ to take part in United’s training camp in Spain, leaving the Dutch coach very light on attacking options with Cristiano Ronaldo having had his contract terminated and Marcus Rashford and Antony only returning to training at the start of the week.

Sancho has been in the Netherlands working on his fitness (Picture: Getty)

Speaking about Sancho’s issues earlier this month, Ten Hag explained: ‘I don’t think he will be back this week, no.

‘We want to bring him back as quickly as possible, but I can’t give a prognosis of when that will be.

‘Sometimes there are circumstances with fitness and mood. We got a drop of quality level and sometimes you don’t know why or what is causing it.

‘That is what we are doing now to try to get him back there. It is a combination of physically and mentally.’

‘Even at the World Cup, every game is difficult to know who to start because there’s so much talent in the offensive line.

‘When you don’t show it week by week you can fall out of the squad, which is what happened.’

The winger has not played a match in two months.