‘It takes a real man to do this’: Restaurant owner responds to James Corden’s comments and lifts Balthazar ban 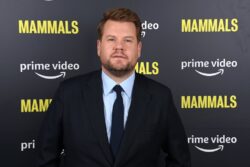 James Corden is officially allowed back at Balthazar (Picture: Getty)

James Corden is no longer banned from Balthazar, so we can all calm down.

The 44-year-old was briefly banned by restaurant owner Keith McNally after claims that he had been ‘extremely nasty’ to waiting staff.

After a back-and-forth over the situation, and a gauntlet laid down by the food mogul, the Late Late Show host addressed the drama on yesterday’s episode, explaining that he initially thought that he did nothing wrong, but admitted that his comments were ‘in the heat of the moment’.

Following this, Keith had the ‘last word’ on the situation, accepting his apology over the incident.

‘LAST WORD……..,’ he penned on Instagram. ‘Last Night on his TV show, James Corden very graciously apologized for his outburst at Balthazar. It takes a real man to do this.

‘In the past, I’ve behaved much worse than Corden, but wasn’t man enough to apologize.

‘For this reason, I’m going to lift the ban on Corden and impose one on myself instead. I’m going to ban myself from Balthazar for 2 weeks. People who live in Glass Houses…’

Keith sent fans into a spin earlier this month when he publicly slammed James for being rude to his staff.

The Gavin and Stacey star is thought to have received the wrong food while eating at the establishment, and was allegedly abusive to staff, demanding free drinks to make up for the mix-up.

James shared his side of the story on Mondya (Picture: CBS)

On Monday’s episode of his CBS show, he offered his side of the story and admitted that his comments had been ‘in the heat of the moment’ – but insisted that he would ‘apologize in person’ to the staff at Balthazar.

‘Because I didn’t shout or scream, I didn’t get up out of my seat, I didn’t call anyone names or use derogatory language, I’ve been walking around thinking that I haven’t done anything wrong,’ he told viewers.

‘But the truth is I have made a rude, rude comment. And it was wrong. It was an unnecessary comment, it was ungracious to the server.’

‘He appreciated the call. I was happy that we got to clear the air. And I felt like we dealt with it privately… but by this point, the story was out there and more people were upset.’

Responding to the backlash, James added: ‘I get it. I totally understand. I understand everybody getting upset and I accept everybody’s opinion.

‘I also hate, as I said to the owner that day, that I’ve ever upset anybody ever.

‘It was never my intention. It just wasn’t. I love that restaurant. I love the staff there.

‘I hope I’m allowed in again one day so when I’m back in New York I can go there and apologize in person, which is something I will absolutely do.’


MORE : Kanye West ‘no longer a billionaire’ after being dropped by Adidas for ‘hateful and dangerous’ comments

Is the feud over?