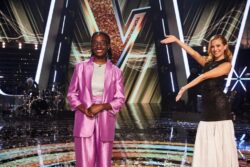 We have our winner of The Voice Kids – and it’s Israella Chris!

Israella was over the moon and almost lost for words after finding out she had won a trip to Universal’s Orlando resort.

However, she won’t be alone on the thrilling rides or by herself watching the fireworks displays, as Emma stunned the remaining three finalists by revealing that they would all be going on the holiday, no matter the outcome.

It was a tough final, which started with battles from Team Pixie, Team Danny, Team Ronan and Team Will, before the groups were whittled down to just four contestants.

But, there could only be one winner, as Israella beat Todd, Sebastian, and Tawana, giving pop star coach Pixie every reason to celebrate.

Isrealla won the most votes from the studio audience (Picture: ITV)

While being showered with confetti after her name was announced, Israella said: ‘Thank you all so much for believing in me and I really hope I made you proud.’

‘I wanna thank these guys over here,’ she praised, pointing to her fellow finalists. ‘You guys brought the fire this year!’

Israella’s friends and family then ran onto the stage to squeeze her, as mentor Pixie expressed her pride.

‘Oh my goodness, Israella is so special, such a raw talent,’ she said.

The champion praised her fellow finalists, who also won a trip to Orlando (Picture: ITV)

What was your favourite performance in this year’s final?Comment Now

‘Tonight was such an amazing show, all of you should be so proud of yourselves,’ she told the runners-up.

Israella delivered a series of powerful performances throughout the series, starting with her audition, which was a soulful rendition of Georgia On My Mind by Ray Charles.

Then, for her final battle, she had everyone teary-eyed with How Great Thou Art, originally by Carrie Underwood.

Tawana really made his mark on the competition (Picture: ITV/Rachel Joseph/Shutterstock)

Congratulating the teen star on her big win, Twitter users hailed the 2022 instalment ‘an incredible series.’

‘A star is born!’, tweeted one, while another said they were in ‘floods of tears’ listening to her sing.

But, there was also a lot of love for the other finalists, as one viewer tweeted: ‘Yay! I am so happy Israella has won this year’s #TheVoiceKidsUK she definitely deserves to win and well done to all the other finalists and contestants as well you’ve all done fantastic!’

Israella’s win also makes Pixie the most successful coach in the show’s six seasons, as she first won with Jess in 2017, then with Daniel in 2018, followed by Justine in 2020.

Will Pixie be able to continue her winning streak next year?

We have our champion!