Is Rhino in The Masked Singer UK Charlie Simpson from Busted? Fans have a compelling theory 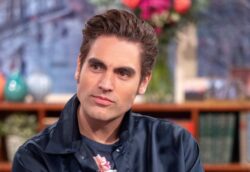 Could Charlie Simpson be hiding behind the Rhino mask? (Picture: Ken McKay/ITV/Shutterstock)

According to The Masked Singer UK fans, the ITV show has gone to the year 3000, with many suspecting Charlie Simpson from Busted is behind Rhino.

The juggernaut programme, hosted by Joel Dommett, arrived back with a bang last week, with former pro footballer Chris Kamara who left after being unveiled as Ghost.

The judges were stunned as Rhino performed a ‘heart-wrenchingly gorgeous’ version of the song, which Jonathan said was better than the original – before guessing it was British singer James Blunt.

Davina guessed it was comedian and social commentator Russell Brand, while the Hot Right Now singer thought it was former England cricketer Andrew Flintoff and Mo suggested it was TV presenter Rylan Clark.

However, fans on Twitter speculated it could be Charlie, 37, owing to some rather telling clues that could refer to his former band, Busted.

Among them was that the clues piece was shot outside a sheriff’s building, with many references to crime, with viewers inferred could be a nod towards ‘Busted.’

Rhino is Charlie Simpson! Knew I recognised his voice from somewhere! Three down arrows, three members of Busted, police car – busted! And his voice is just amazing! #MaskedSinger #MaskedSingerUK

Rhino was voted in by the audience to stay another week, but the second star eliminated was Lulu, wo was unmasked as Piece of Cake.

After being unmasked, she began singing her 1964 hit Shout – which had been one of the big clues.

She said: ‘I’m slightly in shock. I’m in and now I’m off. It’s adorable, I love watching the show, my grandchildren love the show, they love it – I love it and that’s why I’m here.’

Her exit came after the judge chose to save Rubbish and Jacket Potato, who were in the bottom three with Piece Of Cake.

The Masked Singer UK continues on Saturday on 9pm on ITV.


MORE : The Masked Singer viewers reckon Fawn is Stacey Solomon due to one telling clue about ‘Pickle Cottage’

Others believed they could be Rhino.