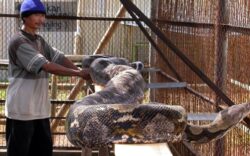 A woman in Indonesia was killed and swallowed whole by a python, according to local reports.

Jahrah was reportedly in her 50s and was on her way to work at a rubber plantation on Sunday morning in the Jambi province.

She was reported missing after failing to return home, and a day later villagers found a python with what appeared to be a large stomach.

Locals later killed the snake and found her body inside.

“The victim was found in the snake’s stomach,” Betara Jambi police chief AKP S Harefa told local media outlets, adding that her body appeared to be largely intact when it was found.

Though it’s rare, this is not the first time someone in Indonesia has been killed and eaten by a python. Two similar deaths were reported between 2017 and 2018.