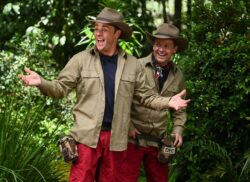 The start date for this year’s I’m A Celebrity… Get Me Out Of Here! has officially been confirmed and we can already hear those opening credits.

The ITV series, hosted by Ant McPartlin and Declan Donnelly, will be back on television screens in just a matter of days, with the launch episode set to air on Sunday, November 6 at 9pm.

While the line-up of famous faces has yet to be announced, several high-profile stars have already been spotted landing at Brisbane airport, including radio presenter Chris Moyles, who is poised to send secret messages to viewers using a bracelet.

Olivia Attwood has also been seen Down Under, seemingly cementing her place as the first-ever Love Island contestant to take part.

Coronation Street actress Sue Cleaver, who plays Eileen Grimshaw on the ITV soap, is the most recent celebrity photographed touching down in Oz, having been pictured on Wednesday morning.

I’m A Celebrity will be back on television screens on November 6 (Picture: ITV)

I’m A Celebrity will be returning to Australia in 2022 after being housed in Wales during the Covid pandemic.

Ant and Dec celebrated going back to the jungle in the recently released trailer, which saw them jumping out of a helicopter into the wilderness.

The teaser clip saw Ant enthusiastically radio through that ‘Alpha November Tango and Delta Echo Ciabatta are coming in hot’.

Before he took a leap of faith, he reminded his co-star Dec of their ‘Ant and Dec Always Together’ contract, with Dec firing back: ‘I wish I’d never signed that thing!’

As they plummet into the outback, they open their parachutes which are emblazoned with the phrase ‘we’re back’.

Andor fans over the moon by first live-action LGBT storyline

But the return to Oz hasn’t been without its issues as earlier this week, the set was forced to close due to adverse weather causing severe flooding.

A spokeswoman said: ‘We closed site for 24 hours as a precautionary measure due to the inclement weather.’

I’m A Celebrity… Get Me Out Of Here! returns on Sunday, November 6 at 9pm on ITV.

There’s not long to wait until we’re back Down Under.