I’m 30, why should I care about the menopause? 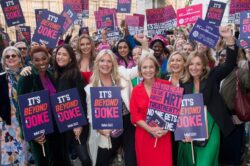 Alice Smellie, front row, second from right along with Mariella Frostrup, third from right, led a rally at Westminster this week alongside Lisa Snowdon, third from left, Carol Vorderman and Penny Lancaster, Ateh Damachi, second row to right of Mariella, and dozens more women who say they will not rest until all women are able to have a positive experience of menopause (Picture: Murray Sanders Menopause Mandate)

It might seem ridiculous to suggest that menopause needs to be on your mind in your thirties.

After all, many of us haven’t even decided whether or not we’re going to have children at that point – never mind what happens to us once we come out the other side of fertility.

So if you are reading this and you are young (by which I mean under the age of 49 – which is my age), then perhaps you are shrugging and thinking about scrolling on. I implore you to wait a few more sentences.

I’m here to explain why it’s absolutely vital that you’re aware of menopause – and the peri-menopause – as early as possible.

And yes, that includes in your 30s.

It needs to be part of the discussion in biology lessons along with puberty and pregnancy, not shoved to the dusty corners of our minds and the back of the bookshops, languishing there until we start to have symptoms and wonder what on earth is happening to us.

That’s one of the reasons why Menopause Mandate met at Westminster this week; with three discussions held at Portcullis House with ambassadors like Cherry Healey, Penny Lancaster and Carol Vorderman, followed by a rally on Parliament’s College Green.

We firmly believe that everybody needs to know about peri-menopause and menopause, from women, men, children, partners, friends and colleagues.

Now, menopause itself is simply a moment, 12 months after your last period.

On average, this happens at the age of 51.

But it’s during the years leading up to it that we may start to experience symptoms.

This time – which can last up to 10 years – is called perimenopause, and although it’s said to start in our mid-forties, many women have symptoms in their early forties or even late thirties.

We have oestrogen receptors around our bodies, and as production of this fluctuates and falls alongside our fertility, we might experience symptoms ranging from irregular periods to dry eyes, headaches, itchy skin, hot flushes, aching joints and bemusing mood changes.

It can also include such severe symptoms such as anxiety, indecisiveness and panic attacks that mimic anxiety or depression.

This was the experience of presenter Cherry Healey, who led a discussion about menopause and misdiagnosis.

Even though she is only 41, for over a year she experienced panic attacks every single night. ‘I wish that I had told someone,’ she says. ‘But I waited for a year and a half and it affected my confidence, my work and my relationships.’

It only dawned on her that this might be down to her hormones when interviewing a menopause specialist for a documentary she was making.

‘Every word he said rang with familiarity. I couldn’t believe that I had had no idea that my hormones might be causing these panics. I had a chat with him after the interview and within a minute he told me what the problem was.’

Cherry’s experience is only too familiar. For many, the first signs that hormones are starting to go awry is when we feel strange anxiety, stress, anger or depression. This can strike out of the blue, and alongside it is the fear of what might be happening.

Many women find the symptoms affect their performance at work or lead to such a loss of confidence that they leave: 1-in-10 women quit their jobs due to the menopause.

What we’re campaigning for is education for women, so that should these first symptoms appear, we recognise them.

Just knowing that it’s hormones – and not, as some women genuinely believe, early onset Alzheimer’s – can be enough.

For others, getting a diagnosis of perimenopause means they don’t needlessly take prescribed anti-depressants for years, which is another familiar outcome for perimenopausal and menopausal women.

In Cherry’s case, she made lifestyle changes which she says are managing her symptoms perfectly. ‘I gave up caffeine, cut down on alcohol, did more exercise and looked at my diet, as well as taking some supplements. She says that this is working for the moment.

Personally, I had a reasonably ideal situation. My worsening PMT – starting in my early forties – got to the stage when, aged 46, I suffered two weeks of anxiety before each period. Having never had anxiety before, I was horrified by the constant feeling of doom that accompanied me, day and night, along with the conviction that I couldn’t do my job anymore.

Fortunately, I run with a group of friends, one of whom is – usefully – Mariella Frostrup. When I said how strange I was feeling she instantly suggested perimenopause and packed me off to my GP.

She immediately offered HRT, which I happily accepted. Within three days of taking it I felt like myself again – and realised that perimenopause had clearly been creeping up on me for quite some years. It was incredible.

Mariella and I came across so many women who simply had no idea what was going on – like her a few years earlier and then me – that we subsequently wrote a book about the subject – Cracking The Menopause.

As a health writer, perhaps it seems ridiculous that I didn’t realise what was going on. But menopause – and even more pertinent to younger readers, perimenopause – has only recently become an acceptable topic in newspaper features. So I didn’t know, and neither do millions of women, which is why so many suffer for years without getting the advice and support they need.

For women under 45 seeking diagnosis, analysis of symptoms will be taken in to account, possibly alongside hormonal tests. Over 45, symptoms are used to diagnose.

Long term, lack of oestrogen affects bone density and cardiovascular health. We ought to all be making lifestyle changes like Cherry, and although not everyone wishes to or is able to take HRT, we should be given the option, and its benefits clearly explained.

HRT – AND THE 40 SYMPTOMS OF MENOPAUSE

In 2002, a study that associated HRT with negative outcomes – for example linking it to various cancers – meant many doctors stopped prescribing it and many women shunned it.

Not only has the formula of HRT medication changed over the years, but in 2015, a new study overturned or diminished many of these findings and proved that the benefits of HRT vastly outweigh the concerns.

However, many doctors trained during the time of the initial report or who remember the warnings have never forgotten the alarmist misinformation and as a result have never returned to HRT.

Unlike anti-depressants, which are frequently wrongly prescribed to menopausal women, the effects of HRT can be noticed quickly – in a matter of days – and if the HRT doesn’t work, the treatment can usually be stopped without issue.

WHAT ARE THE 40 SYMPTOMS OF MENOPAUSE?

If you see this and you are young (by which I mean under the age of 49 – which is my age), then perhaps you are shrugging and thinking about scrolling on. I implore you to read a few more sentences.