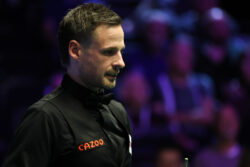 Dave Gilbert has reached the Masters semi-finals on both his appearances in the event (Picture: Getty Images)

Dave Gilbert is getting an unexpected crack at the Masters at the start of 2023 as he looks to put months of struggling behind him by getting back on course on one of snooker’s biggest stages.

The 41-year-old has benefited from Yan Bingtao’s suspension due to the ongoing match-fixing investigation in the sport, taking his spot at Alexandra Palace as he was next in line in the rankings.

It is a third time at the prestigious event having reached the semi-finals on both his previous visits in 2020 and ’21.

After a tricky year or so that has seen the Farmer struggle for results and deal with distractions off the table, it is a shot at putting a spark back into his career, and his life in general, after some low points in recent months.

‘Obviously last year, 2022, was a poor year on the table and a lot going on off it,’ Gilbert told Metro.co.uk. ‘I bought the snooker club [Potters in Swadlincote] and chucked all my time into getting this place up and running. A lot of late nights in here, through the night, trying to get it painted, decorated and sorted. I didn’t expect to have so much interest in it, but it took over life.

‘I was playing quite well, won a tournament, then things changed, my priorities changed, I’ve had things going on off the table, like everybody else, we all have life struggles at times. I’d like to have done things differently but I’m just trying to get my head back down from now.

‘I’m actually getting a bit of help, through World Snooker, that’s been good to talk to somebody. The club’s all up and running now so I’ve taken a step back with that, it’s doing really well, so that’s another thing off my mind. If I want to be a good snooker player, because I do take pride in how I play, I know the effort levels it takes and I need to put a hell of a lot more  into that, I need to have less distractions.

‘But I have really missed being able to play snooker. I’m sick of being crap, I am, it’s quite boring now. Since I got the email to say I was in the Masters, I’ve probably played more in the last five days than I have in the last five months.’

Things were obviously not right with Gilbert on more than one occasion this season, delivering a couple of notably downbeat interviews at tournaments, but most obviously when he walked out of a match mid-game.

Gilbert missed a ball at 3-2 down to Andy Hicks in German Masters qualifying and shook his opponent’s hand despite it being a race to five frames.

He is yet to discover his punishment for the early concession, with World Snooker Tour moving to help him out with any ongoing issues, but he is left embarrassed by what happened.

‘That isn’t a normal thing to do. I’m embarrassed about it. I took pride in becoming a better pro and I’ve spunked it all away the last 12 months,’ he said. ‘People are looking at me funny, I’ve been doing  quite a few daft things that are out of character, just by being in a bad frame of mind. World Snooker got in touch with me, asked how I was, they suggested ringing this number, Sporting Chance and I’ve been speaking to someone locally. It’s been nice to get a few things off my chest and clear myself out.

‘I’ve said to her it disappoints me how I’ve behaved and acted lately. I don’t want to be that idiot that’s walking out of matches or falling out with players, getting the hump all the time and acting like a brat. I don’t want to be that person. Snooker’s done some crazy things to me over the years, it’s a real love-hate relationship, it makes me someone I’m not. I had loads of good advice when I was a kid and didn’t take any. There’s a lot of good people out there who can help you think better. I wish I’d done it a lot sooner.

Gilbert memorably made the semi-finals of the 2019 World Championship and suffered an emotional deciding-frame defeat to John Higgins (Picture: Getty Images)

‘I’ve felt like walking out a lot. There’ve been times before I’ve felt like I’ve had enough and it ain’t for me today. I shouldn’t have turned up that day, I was very agitated in myself, hadn’t slept well. It was as early as the first frame, I missed a pink in the middle, it drifted uphill and I could have walked then.

‘I’m in Andy Hicks’ pocket, I can’t beat the guy, he must laugh every time he draws me. It’s nothing personal to Andy and I apologise to him, World Snooker, the people who support me. I don’t want to behave like that, but for reasons I don’t really want to talk about, I didn’t want to be there that day.’

Off-table issues make snooker a near-impossible task at times, but on top of that Gilbert is a character prone to slumps in mood, which is far from helpful on the baize, especially when it has never really been addressed.

‘I’m just a very up and down guy,’ he said. ‘I’m either all in or nothing at all. It’s well renowned that I haven’t got the best attitude at times, I know that and it’s something I’ve worked very hard on to improve.

‘I was playing really well because I thought better. That certainly helps, when you think clearly. It’s a spiral because I take pride in how I play and when I’m not playing how I can I get very frustrated, disappointed in myself. I’ve not been very kind to myself for quite some time, I need to sort that out.

‘It’s obvious to everyone I haven’t been in a great headspace for a while. I think I’ve probably always been someone who suffers from something, I don’t know what that something is, I’ve always been a self-sabotager.

‘I don’t know. It’s thoughts I’ve probably had forever because I’m like a f***ing yo-yo.

‘I’m old school, farmer’s background, you just get on with life. My old man lost his arm when I was three and he was back at work within two weeks. Me just not wanting to play snooker for a day isn’t really a thing. But things haven’t been right between the ears, and speaking to the people that World Snooker have put me onto has been good.’

Gilbert takes on Mark Williams in the first round at the Masters this year (Picture: Getty Images)

There is intense frustration with the situation because after years of being something of a journeyman, Gilbert appeared to have unleashed his vast potential, reaching three ranking finals and a World Championship semi-final from 2018-19.

Working with coach Steve Feeney, sticking to routines in practice and his home life and generally being an entirely dedicated professional got him to the elite of the game. It is no incredible secret, but as it began to unravel, he has not been able to stop the slide.

‘I was doing everything, everything I could,’ he said. ‘Happy home life. Pure focus on trying to be a better snooker player and person. Fit as a fiddle. Ate well, slept well. Regimented with my practice, I put everything into it.

‘Them two or three years, 2018-Covid. That was the start of my downfall, Covid. I felt very bitter, lost a lot of money I’d worked hard for. Lost a sponsorship deal, hated being locked up, that was the start of my issues and problems, I went off the rails for a little bit and started doing things out of character.

‘I’d love to piece it together again. Waking up one morning and getting back into that routine again. I’m in the Masters and I’m in the Grand Prix because of what’s gone on. I don’t just want to turn up and hit balls, I want to turn up and play properly, give myself a chance, because I can play the game a little bit. I’ve proven that to myself, that’s what I always wanted to do. I’d love to get my old routine back.’

There is obvious frustration within Gilbert and a fair amount of frustration for those who want him to do well as there seem to be clear answers to the problems, but mentally it is proving tough for the Farmer to get the tractor back on tracks.

‘I don’t know if I can get back to where I was,’ he said. ‘I hate being rubbish, I hate not feeling confident in myself, it’s horrible. It weren’t that long ago I used to walk into places and be thinking this could be my week.

‘It’s not fun being a number. Nicking one or two matches and thinking it’s great. That’s boring, it’s not for me. Feeling like you can contend is a real nice feeling to have. When I was 10 or 12 in the world or whatever, I felt I can play well enough here to win this event.

‘Can I get back to it? You can’t guarantee anything. I know what effort I used to put in, I don’t even know I’m prepared to put that in. I might be what I am now.

‘I think my life would be better if I did though. I loved being fit and healthy, I felt fantastic in myself. I loved the gym, I need to get back to that, cleared my mind of other stuff. Obviously he’s a fantastic player anyway, but it’s no coincidence Mark Allen has lost all this weight, cleared his mind a bit and he’s winning everything. It’s what I need to do.

‘It’s pretty easy really. I know the answers to me own problems, I’ve just not put them into place.’

The Masters could be the start of that process, an unexpected boost and the first of a few milestones to aim at between now and the end of the season which might just focus the mind and bring a bit of cheer to what has been a miserable time for a very popular player.

‘I feel lucky to be in the Masters, it’s a huge opportunity. I want to practice again, I need to practice,’ said Gilbert. ‘I might not be able to compete anyway, but I want to give it a go. I want to end this year at the Crucible, I want my top 16 spot back properly.’


MORE : Match-fixing a ‘cancer in any sport,’ says Ken Doherty who is shocked and saddened by snooker scandal

‘Snooker’s done some crazy things to me over the years, it’s a real love-hate relationship.’