Hugh Jackman shuts down rumours he took steroids while playing Wolverine: ‘I’ve got to be careful what I say here’ 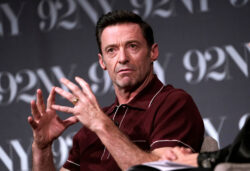 Hugh Jackman has addressed rumours he used steroids to get into shape while playing Wolverine in the X-Men franchise.

The Australian actor explained he’d been warned about the side effects of steroid use (hair loss, increased risks of cancer and erectile dysfunction) and insisted he got jacked ‘the old school way’.

Jackman is reprising the iconic X-Men role in the upcoming Deadpool 3 and recently appeared on Who’s Talking To Chris Wallace to discuss the project.

During the interview, Wallace frankly asked the star: ‘Over the years people have wondered, did he juice? Did he take steroids?’

Jackman, 54, was quick to shut down such rumours, saying on the HBO Max show: ‘No, I love my job. And I love Wolverine.’

He added with a grin: ‘I’ve got to be careful what I say here, but I had been told anecdotally what the side effects are of that.

The Australian actor explained he’d been warned about the side effects of steroid use (Picture: Twentieth Century Fox Film/Kobal/REX/Shutterstock)

Sharing an insight into the protein-rich diet he’s forced to stick to while prepping for the role, Jackman noted: ‘I’ve eaten [so many] chickens – I’m so sorry to all the vegans and vegetarians and to the chickens of the world. Literally the karma is not good for me. If the deity has anything related to chickens, I’m in trouble.’

Elsewhere in the interview, the Greatest Showman star revealed he’ll have to train for six months to return to peak Wolverine fitness after agreeing to reprise the role for Deadpool 3 at the request of Ryan Reynolds.

‘So, we have six months from when I finish [Broadway’s The Music Man] to when I started filming. And I’m not doing any other work.

Are you excited for Hugh Jackman’s return as Wolverine?Comment Now

Jackman recently admitted he ‘fully intended’ 2017’s Logan to be his final outing as Wolverine, but that the idea of returning had always been ‘lurking and brewing’ in his subconscious.

But in September last year the legendary actor finally said yes, much to the delight of fans everywhere.

Reynolds made the announcement through a hilarious video in which he teased that he had no ideas for the new Deadpool film, ‘except one’.

Jackman then strolled into frame, and Reynolds said: ‘Hey Hugh, want to play Wolverine one last time?’ to which the actor casually replied: ‘Yeah, sure Ryan.’


MORE : Golden Globes 2023 winners: How to watch The Banshees of Inisherin, The Fabelmans, Elvis, and Tár