How many times did Pele win the World Cup with Brazil? 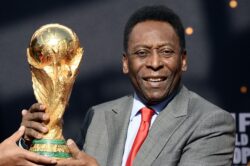 Pele, regarded as one of the greatest football players of all time, has died at the age of 82.

The Brazilian had been in hospital since November 29 due to complications related to colon cancer, which was diagnosed in September 2021.

Pele shone on the global stage with Brazil, right through from scoring on his national team debut as a 16 year-old in 1957, to his eventual international retirement in 1971.

And as the football world stops to remember the icon of the game, we take a look at how many times Pele won the World Cup with Brazil and how many goals he scored in the competition.

How many times did Pele win the World Cup?

His first in 1958 arrived when he was just 17 years-old, which at the time made him the youngest player to ever play in the World Cup.

Pele scored a hat-trick against France in the semi-finals, becoming the youngest player in the history of the competition to do so.

His appearance in the final also made him the youngest ever player to play in the match, with his two goals helping Brazil overcome hosts Sweden 5-2 in Stockholm.

Four years later in Chile, Pele started the World Cup in fine form with a goal and an assist in the first game against Mexico.

However, in the next game Pele injured himself attempting a long-range shot against Czechoslovakia, which forced him to miss rest of the tournament.

Brazil went on to win their second World Cup with another victory over Czechoslovakia in the final.

At the time, only players who played in the final received a medal, before FIFA changed the rules in 1978 to ensure the whole squad received one.

As such, Pele was given his winners medal by FIFA retroactively in 2007.

The 1966 World Cup in England saw Brazil eliminated after just three games, but injury saw Pele feature in just two of them.

Pele holds the record for the most World Cups won by a single player (Picture: Keystone/Getty Images)

Pele’s final World Cup triumph came in 1970, with the Selecao beating Italy in the final in Mexico City courtesy of one goal and three assists from their star plater.

Pele was awarded the Golden Ball as the player of the tournament, which would be his last World Cup before retiring from Brazil a year later.

He remains the only player to have won three World Cups.

How many goals did Pele score in the World Cup?

Throughout his international career, Pele scored 77 goals in 92 caps, the joint-most in Brazilian history alongside Neymar.

Of the 77 goals, 12 came in his 14 appearances at the World Cup, making him the second-highest scoring Brazilian in the competition behind Ronaldo Nazario.


MORE : When is the next World Cup and where will it be held?

A look at Pele’s history on the greatest stage of all.