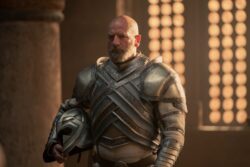 House of the Dragon star Graham McTavish has revealed that his Twitter account has been ‘hacked’, as he warned his fans over any potential activity from his profile on the platform.

Just this week, broadcaster Piers Morgan found himself the target of a Twitter hack when a series of offensive tweets were published by his account, which included racial slurs and derogatory remarks about the late Queen Elizabeth II.

After appearing to have been locked out of his account, the TalkTV presenter’s profile was quietly restored shortly afterwards, with his son Spencer Morgan even poking fun at the debacle.

After wishing his followers a happy time in the period between Christmas and the New Year, he said: ‘The purpose of this, apart from showing you my twinkly tree, is just to let you know that my Twitter account has been hacked, which I’m sure is not unusual at all. It’s the first time it’s ever happened to me.’

The 61-year-old continued: ‘So what it means is, first of all, I’m not currently on Twitter because I’m waiting for them to resolve the issue, which they are trying to do. And secondly, goodness knows what’s being posted on my Twitter account by whoever this jolly individual is.’

Graham’s House of the Dragon character Ser Harrold Westerling is a man of integrity (Picture: HBO)

The actor shared a video updating his fans on the situation (Picture: Instagram/@grahammctavish)

Graham promised that he’d inform his fans when he was back on Twitter, and in the meantime, wished everyone a ‘wonderful, wonderful New Year celebration wherever you are in the world’.

Fortunately for Graham, the person or people behind his Twitter hack don’t appear to have done any damage.

His most recent tweet was posted on Boxing Day, in response to someone saying they were going to do a film-watching marathon of The Hobbit trilogy on Christmas, to which he replied: ‘Agreed.’

His latest likes also don’t appear to have been tampered with, having recently liked tweets that he was tagged in by fans of his various works.

Graham recently spoke to Metro.co.uk about what fans can expect from season two of House of the Dragon, in which he plays Ser Harrold Westerling.

‘I think it’ll ramp up in terms of the action and I think it will move out of just the locations that we’ve been in up until now,’ he explained.

‘I think season one was a much more domestic experience whereas this one will be much more fractured, and possibly move a little more into the world that people are familiar with, with Game Of Thrones, where there were multiple storylines existing at one time.’

House of the Dragon is available to watch on Sky and NOW.

Piers Morgan was also recently targeted by a Twitter hack.