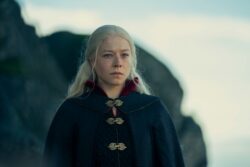 Rhaenyra will find out about her father’s death in the season finale (Picture: HBO)

HBO has responded to the leak of the House of the Dragon finale episode, decrying it as ‘unlawful action’ as the network ‘aggressively’ pulls copies that have arisen online.

On Monday, the finale episode of the first season of the Game of Thrones prequel is set to be released, following the civil unrest breaking out within the Targaryen family.

While many fans can’t wait to see how the series of events unfold in the finale when Rhaenyra finally finds out about her father’s death, the episode has already been leaked online.

In a statement sent to Deadline, an HBO spokesperson said: ‘We are aware that the 10th episode of House of the Dragon has been posted on illegal torrent sites.’

They continued: ‘It appears to have originated from a distribution partner in the EMEA region. HBO is aggressively monitoring and pulling these copies from the internet.’

In episode nine, Princess Rhaenys (Eve Best) soared away on her dragon to warn Rhaenyra of what happened in King’s Landing (Picture: HBO)

Alicent went behind Rhaenyra’s back to crown her son as King (Picture: HBO)

The spokesperson said that HBO are ‘disappointed that this unlawful action has disrupted the viewing experience for loyal fans of the show, who will get to see a pristine version of the episode when it premieres Sunday on HBO and HBO Max, where it will stream exclusively in 4K.’

House of the Dragon, which is based on George RR Martin’s book Fire & Blood, has already been confirmed for a second season.

The author has said that in his opinion, he believes the tale warrants at least four seasons to do the story justice.

Writing on his blog, the writer admitted that he wished there was more time on the show to portray ‘the relationship between Rhaenyra and Ser Harwin, the marriage of Daemon and Laena and their time in Pentos, the birth of various and sundry children’ and ‘everything else we had to skip’.

He added that he was ‘thrilled’ the show was able to have ‘10 hours every season to tell our tale’, adding ‘it is going to take four full seasons of 10 episodes each to do justice to the Dance of the Dragons, from start to finish’.

The House of the Dragon finale airs in the UK on Monday from 2am on Sky Atlantic and NOW.


MORE : House of the Dragon’s unnerving Larys Strong scene in episode 9 isn’t just about a foot fetish – it’s a foreboding sign of more evil to come

‘HBO is aggressively monitoring and pulling these copies from the internet,’ they said.