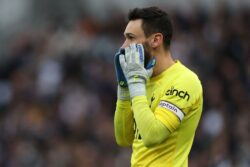 Graeme Souness has slammed Hugo Lloris for his role in Tottenham’s defeat to Aston Villa on New Year’s Day.

Spurs were booed off the pitch at the Tottenham Hotspur stadium after putting in a dismal performance against Villa as they fell to a 2-0 defeat.

Goals from Emi Buendia and Douglas Luiz gave Unai Emery’s side all three points, while Antonio Conte’s men have now slipped out of the top-four, having lost four of their last seven Premier League games.

While no Tottenham player can say they had a good afternoon, captain Lloris came under heavy scrutiny in his first match back since France’s World Cup final defeat two weeks ago.

The goalkeeper was at fault for the first goal after spilling Luiz’s long-range shot, which allowed Ollie Watkins to set up Buendia.

Lloris has been criticised numerous times in recent years for similar mistakes and many wonder if the time gas come to replace the 36-year-old.

Souness certainly thinks so, telling Sky Sports: ‘I’m not a fan of Lloris. He is past his sell-by date.

Hugo Lloris will not want to see this again! ð²

Emi BuendÃ­a makes the Tottenham ‘keeper pay for his mistake with a calm finish! ð¥ pic.twitter.com/gzHt5vcdXK

‘Since the start of last season, he has made four errors which have led to goals – that’s the worst record of any goalkeeper.’

Since the start of the 2017/18 season, Lloris has made 13 errors leading to goals for Tottenham in the league – the second worst record of all players in the top-flight behind only Everton keeper Jordan Pickford.

The life-changing football league with more than one goal

Ahead of the game, Conte had praised his keeper who won the World Cup in 2018 and has been at Spurs since 2012.

The manager said: ‘I think we lose time if we talk about Hugo because his career speaks for itself. We are talking about one of the best keepers in the world in the past 10 years.’

An awful afternoon for Spurs.