Hershey facing lawsuit over heavy metals found in their chocolates 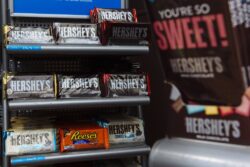 Hershey’s is being sued by a consumer over the amount of lead and cadmium found in their chocolates (Picture: Bloomberg via Getty Images)

The Hershey Company was sued by a consumer who said the company misled customers about the amount of heavy metals found in their dark chocolates.

The suit, filed by Christopher Lazazzaro of Nassau County, New York, claims that he would not have purchased Hershey’s products if the company had disclosed the amount of heavy metals were in them.

The suit was filed just weeks after Consumer Reports published a study that found many popular brands of dark chocolate contained dangerous amounts of lead and cadmium. The lawsuit directly cites this study.

In the study, Consumer Reports noted that there are no federal restrictions for the amount of lead or cadmium in food products. Instead, they used California’s benchmarks because ‘CR’s scientists believe that California’s levels are the most protective available.’

Hershey’s products fared poorly in the tests. Hershey’s Special Dark Mildly Sweet Chocolate had 265% of the safe amount of lead.

The lawsuit states that Hershey’s marketing and advertising of the dark chocolates is ‘false, deceptive, and misleading because it does not disclose the high levels of lead and cadmium in the products.’

The suit notes that lead is especially dangerous to young children and pregnant women, and can lead to mental and physical developmental disorders. It also notes that cadmium can lead to kidney disease and fragile bones.

The suit is seeking a $500million settlement, which includes $500 for every transaction.

Hershey’s has not yet commented on the lawsuit.

‘Chocolate and cocoa are safe to eat and can be enjoyed as treats as they have been for centuries,’ the National Confectioner’s Association stated after the report was first released.

The trade group noted that the benchmarks used by Consumer Reports were not health safety standards, but guidelines from the California Office of Environmental Health.

The suit was filed just weeks after Consumer Reports published a study that found many popular brands of dark chocolate contained dangerous amounts of lead and cadmium.