‘He is our guard dog!’ – Antony hails impact of Casemiro after transforming Manchester United’s midfield 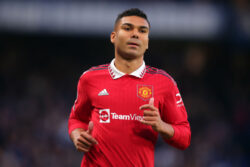 Casemiro is now playing a vital role in the middle of the park (Picture: Getty)

Manchester United view Casemiro as their ‘guard dog in the middle’, according to his teammate Antony.

Casemiro has started United’s last four league games, brought into the team following the 6-3 hammering at Manchester City having been handed some time to get to grips with English football.

The serial Champions League winner has begun repaying the club’s faith in him with some hugely impressive displays in midfield, filling a void that has gaped in the middle of the park for a number of years.

The Brazil international played a pivotal role in United’s 2-0 win over Tottenham last Wednesday, arguably the team’s finest performance of the season, and excelled away to Chelsea on Saturday where he scored a dramatic injury time equaliser that sparked wild celebrations in the away end.

The former Real Madrid star passionately screamed in celebration after his first goal for the club with his impact in the heart of United’s midfield being felt by those around him.

‘Casemiro is a more serious type,’ Antony said of his teammate in an interview with the pair via United’s official website.

‘I always say he is our guard dog in the middle. He is a no-nonsense guy, a more serious type. I think he will leave these goal celebrations to us attacking players.’

United hope to close ground on league leaders Arsenal who have benefited from their own formidable presence in the midfield in the form of Thomas Partey.

The Ghana international was briefly linked with a move to Old Trafford before his arrival in north London but former United defender Rio Ferdinand has emphatically dismissed comparisons between the two.

‘We’re talking about a player many rungs up, many rungs. It’s like saying before we had Fred and McTominay in the CDM position would you not have taken Partey? Well yes I would have but what does that prove?

‘All I’m saying is we’re talking about Casemiro against Partey and it’s not a competition.’

United return to Europa League action on Thursday against FC Sheriff before the visit of West Ham United on Sunday.


MORE : ‘I would go for it! – Lille star Jonathan David responds to Manchester United and Chelsea interest

The summer signing is now playing a vital role in the team.