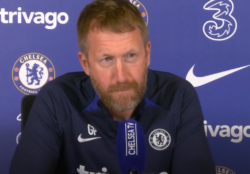 The former Arsenal captain missed Sunday’s morale-sapping 4-0 defeat against Manchester City in the FA Cup with a back injury, just three days after he suffered the ignominy of having been hauled off against the same opposition after he was introduced as an early substitute.

But with the Portugal international still waiting to find out whether or not he was signed in time to be eligible to make his debut at Craven Cottage, Potter has been boosted by the news that Aubameyang has made a recovery and is in contention to start.

‘Pierre is fine and he will be in the squad,’ confirmed Potter, speaking at his pre-match press conference.

Chelsea have slipped to 10th place in the Premier League following a miserable run of form which has coincided with a major injury crisis.

Potter was able to provide positive updates on key absentees including the likes of Raheem Sterling, Ben Chilwell and Reece James, but the outlook was less than positive for Chrisitan Pulisic.

The America international enjoyed a reputation enhancing World Cup campaign but is now facing two months on the sidelines with a knee injury.

‘Christian [Pulisic] is a couple of months we think. Raheem is less, hopefully less than that,’ added Potter.

‘Ruben and Ben Chilwell getting closer. Reece was out on the grass today, not training with the team but on his own. N’Golo is training on his own but a long way to go.’

The out of form striker missed Sunday’s FA Cup defeat against Man City with a back injury.