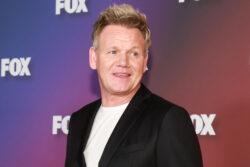 The chef thought he was on a seven-second delay (Picture: Jason Mendez/WireImage)

Gordon Ramsay livened up morning radio on Tuesday no end by dropping an F-bomb in his usual style – much to the horror of presenter Chris Moyles.

The chef and TV star was starting an interview with the veteran radio broadcaster just after 8:40am, with Chris joking that Gordon was a ‘bit nervous’ and wondering if it was ‘his first interview’.

Laughing, the Kitchen Nightmares star responded: ‘Thank you so much for having me on. I’m so f**king excited!’

To gasps and audible panic from the team, Chris then exclaimed: ‘Oh my! Language already! You just said the F-bomb.’

A stuttering Gordon then immediately tried to defend himself, revealing he thought there was a broadcast delay and any swearing could be bleeped out, allowing him to speak freely with his, um, preferred vocabulary.

*Language warning for the clip below*

As the team denied it, he added to Chris: ‘You sent me a text before I came in here – “You’re fine in case something slips out”.”

‘Gordon, you’ve never replied to a text from me since 2010!’ the I’m A Celebrity star hit back.

With the chorus of apologies to listeners beginning, Gordon chimed in: ‘Okay, my apologies. I’m sorry! Why didn’t you tell me?’

Gordon Ramsay with the F Bomb on @RadioX

Great start to the day ðð

I don’t think I have laughed so much during a chat on the radio as I did when listening to @GordonRamsay and @ChrisMoyles on @RadioX Absolutely fantastic!! #radiox ððððð¤£ðððð¤£ððð¤£

However, the show’s audience was loving Gordon’s faux pas.

‘Gordon Ramsay with the F Bomb on @RadioX, great start to the day,’ tweeted one fan with laugh-crying emoji, while another added: ‘Loved @GordonRamsay dropping the F bomb on @RadioX.’

‘I don’t think I have laughed so much during a chat on the radio as I did when listening to @GordonRamsay and @ChrisMoyles on @RadioX. Absolutely fantastic!!’ gushed an enthusiastic listener.

This live example of the celebrity chef’s fondness for F-bombs came not long after Channel 4 accidentally aired uncensored episodes of Gordon Ramsey’s Kitchen Nightmares as well as his titular 24 Hours to Hell and Back during the day.

Gordon is known for getting pretty fruity with his language on his TV shows, including Hell’s Kitchen (pictured) (Picture: Greg Gayne/Granada/Fox Tv/Kobal/Rex/Shutterstock)

Are you surprised by Gordon’s slip-up?Comment Now

Both were called out by broadcast regulator Ofcom for including ‘offensive language’ and being shown before the watershed at 9pm.

A statement shared on their website read: ‘Today we’ve announced that two TV programmes, featuring Gordon Ramsay, broke our broadcasting rules, because they included offensive language but were shown before the 9pm watershed.

‘An episode of Gordon Ramsay’s 24 Hours to Hell and Back, broadcast before the watershed at 12.10 on Channel 4 on 10 August, included instances of the most offensive language, including the F word.

‘An episode of Ramsay’s Kitchen Nightmares USA, broadcast at 4pm on E4 Extra on 7 July, included 39 instances of offensive language, with 17 uses of the F word, before the watershed and without any warnings ahead of the programme or apologies after it had been shown.’

Turns out he thought he’d get bleeped (as per).