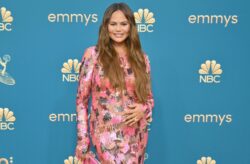 Chrissy Teigen and her husband John Legend announced back in August that they were gearing up to welcome another child (Picture: Michael Buckner/Variety via Getty Images)

Chrissy Teigen kicked off 2023 by sharing a series of sun-soaked snaps from her family’s festive getaway.

The star posted seven photos of herself, her husband John Legend and their two children – Luna, six, and Miles, four – getting up to all sorts of fun while on their lavish holiday.

In one image, 37-year-old Chrissy could be seen sitting in between Luna and John at lunch with her bump on show in a chic black bikini top.

A second photo showed Chrissy lounging in an armchair while others captured her, John and their friends enjoying a game of cards and Chrissy’s mum, Vilailuck, beaming from ear to ear while posing with her daughter.

It comes after Chrissy called out followers of hers who had been commenting on the length of her pregnancy.

Chrissy wowed in a black bikini as she enjoyed her family getaway (Picture: instagram/chrissyteigen)

The A-lister shared a snap of herself curled up on an armchair (Picture: instagram/chrissyteigen)

Chrissy and John’s youngest child Miles had no qualms posing for the camera (Picture: instagram/chrissyteigen)

Luna could be seen tucking into some fruit in one of Chrissy’s photos (Picture: instagram/chrissyteigen)

Chrissy, John and their pals sat down for a game of cards (Picture: instagram/chrissyteigen)

Chrissy and John were joined on vacation by her lookalike mum (Picture: instagram/chrissyteigen)

Miles seemed to have a blast in the balmy weather (Picture: instagram/chrissyteigen)

Taking to social media last week, the star shared a photo of herself lounging poolside captioned: ‘‘’Omg I feel like she’s been pregnant foreverrrrrr,” how do you think I feel thank u.’

Chrissy and John announced in August that they’re set to add to their family once again, after medically terminating son Jack in 2020, following devastating pregnancy complications.

‘The last few years have been a blur of emotions to say the least, but joy has filled our home and hearts again,’ she said on social media at the time. ‘1 billion shots later (in the leg lately, as u can see!) we have another on the way.

‘Every appointment I’ve said to myself, “ok if it’s healthy today I’ll announce” but then I breathe a sigh of relief to hear a heartbeat and decide I’m just too nervous still.

‘I don’t think I’ll ever walk out of an appointment with more excitement than nerves but so far, everything is perfect and beautiful and I’m feeling hopeful and amazing. Ok phew it’s been very hard keeping this in for so long!’

Chrissy and John spent the festive period lapping up the sunshine while on holiday (Picture: Jeff Vespa/WireImage)

Speaking in September to Entertainment Tonight, John revealed he and his wife had been keen to add to their brood.

‘Chrissy, I think, wants more,’ he shared. ‘I’m one of four, so I’m cool with it. I was like, once you get into that zone it’s a lot of folks – especially when you’re traveling, [it] gets difficult.

‘Chrissy and I, we get on a lot of planes together and once you have four kids, it gets logistically – it gets complicated.’

‘I’m gonna take a break for sure when we have the new baby,’ he added of his work commitments. ‘But we’ll go back on the road and celebrate this album.

‘We got a lot of songs that we’re excited to play live. And it’ll be exciting to do that on the road.’

We’re rooting for you, guys!

She really is bumping along nicely.