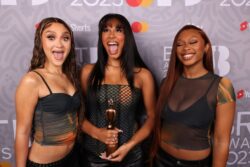 Flo are going from strength to strength (Picture: PA)

Three-piece girl group Flo have been named winner of the BBC Radio 1 Sound of 2023 poll.

The London-formed group, which consists of Jorja Douglas, Stella Quaresma and Renee Downer, were chosen by a panel of more than 130 industry experts and artists, with Sir Elton John, Dua Lipa, Celeste and Sam Smith among those voting for the top sound.

Previous winners include Smith as well as 50 Cent, Haim, Ellie Goulding and Adele. So they are some pretty big names they’re sitting amongst!

In a statement, Flo paid tribute to 2022’s winner and their ‘gal’ TikTok star PinkPantheress and expressed admiration for the artists that came before them.

They said: ‘Wow, we did it! To win this accolade not even a year after we released our debut single Cardboard Box is wild.

‘We feel so connected to our British music roots winning BBC Radio 1’s Sound Of…Thank you to everyone who voted for us and put girl groups back on the map.

‘To be recognised for our music and people to believe in our vision inspires us to go further this year! 2023 we’re ready.’

This news comes hot on the wheels of Flo being named the winner of the 2023 Brit Awards Rising Star award.

They beat Burns and Nia Archives to join the ranks of hitmakers and previous winners Adele, Florence + the Machine and, again, Smith.

Flo started when childhood friends Downer and Quaresma met Douglas at an audition and went on to release Cardboard Box, produced by Little Mix and Dua Lipa-collaborator MNEK, in March.

They have also performed the song on late night US TV show Jimmy Kimmel, the UK’s Later…with Jools Holland, and The Glamour Women of the Year Awards.

Flo released their debut EP The Lead at the height of summer 2022 to critical acclaim, and it has since amassed more than 70 million global streams.

The band said on Twitter this month that a remix of Stormzy’s Hide And Seek is ‘coming soon’ and will see them collaborate with the grime star.

BBC Radio One DJ Jack Saunders said: ‘Flo are a revelation to the scene and a worthy winner of the sound of list this year.”

He also paid tribute to the “vibrant, creative and exciting artists that want to push the boundaries” that were nominated.


MORE : Lord Alan Sugar opens up about his future on The Apprentice as BBC series returns for 2023