George Clooney and Amal still write love letters to each other: ‘We leave them on the pillow’ 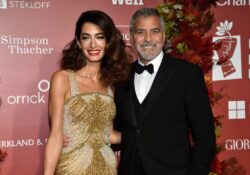 George and Amal Clooney are still as romantic as ever (Picture: Evan Agostini/Invision/AP)

George Clooney and his wife Amal still write love letters to each other – our hearts can’t take it!

The Ticket to Paradise actor has recalled how his agent told him he was ‘going to marry’ the 44-year-old barrister as soon as he met her in 2013, and though the 61-year-old star was initially skeptical, the pair quickly hit it off.

Appearing on The Drew Barrymore Show, he said: ‘Well its funny she came to the house in Como with a friend of hers to visit and immediately I was like…

‘The funniest thing is Bryan Lourd my agent called me, he had just met Amal at some other thing and she was like, “Yeah I am going to go to Como with a friend of mine,” and he called me up and he said, “There’s a girl coming to your house that you are going to marry.”

‘I was like, “You’re an idiot. You know that’s not going to happen”. And then in comes Amal and we stayed up all night talking and I started writing her a bunch of letters.’

George clarified he meant ‘on pen and paper’ rather than a digital take on love letters, and he revealed he and his wife – who he wed in 2014, proving his agent right – have kept up the letter writing tradition.

George says he and Amal leaves their notes under the pillow (Picture: Reuters)

The proud father-of-two – who has five-year-old twins Alexander and Ella with Amal – said: ‘Yep, we still write letters. Leave them on the pillow.’

Despite the couple still living in marital bliss, George – who previously insisted they’ve ‘never’ had an argument – recently claimed he wasn’t in any position to give marriage advice.

Honestly, love letters on the pillow sound like a pretty great start to us!

George has learned to shift his priorities and focus on what matters most, by finding ‘all the things that we have in common and not worry about the little things’.

However, he told E! News: ‘Because I started so late, I’m not allowed to give advice to anyone. I have to look at it as if I’m the luckiest human being alive and then just appreciate that.’

Still, George did admit his long wait to settle down has helped him look at things ‘a little differently’.

‘We agree on most things. When you’re 61, which apparently I am… As you get older, you’re kind of looking at things a little differently,’ he explained, pointing to how ‘people always worry about’ things like decorating.

He said: ‘Amal wants to paint the wall yellow. And if I was younger, I feel like that’s a stupid color. And now you just go, “I don’t care. Who cares if a wall’s yellow?” ‘

Earlier this year, Amal described her Academy Award-winning husband as ‘incredibly inspirational’, and gushed over how their home is ‘filled with love and laughter’.

In a rare moment shining a light on their relationship, she said: ‘Marriage has been wonderful. I have in my husband a partner who is incredibly inspirational and supportive, and we have a home filled with love and laughter.

‘It is a joy beyond anything I could ever have imagined. I feel so lucky to have found a great love in my life, and to be a mother.’


MORE : George Clooney on the awkward moment he had to kiss Julia Roberts in front of wife Amal

The loved up couple are still as romantic as ever.