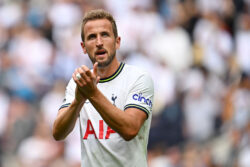 Gary Pallister has urged Manchester United to sign Cody Gakpo in January before launching a move for Harry Kane in the summer.

Despite improvement under Erik ten Hag, United are still in need of a reliable goal scorer, heightened by Cristiano Ronaldo’s departure with the 37-year-old released by the club last month.

Anthony Martial has been the manager’s first choice option when fit, scoring four goals in seven appearances but persistent injuries have hampered his progress under the Dutchman.

United will attempt to solve the problem in January and are preparing a €50million bid for PSV Eindhoven star Gakpo, who has netted 13 times for his club this season, notching three for Netherlands in the World Cup.

And while former United defender Pallister believes Martial can thrive under ten Hag with Marcus Rashford also enjoying an impressive season, he is eager to see a new option arrive in January.

‘Anthony Martial if he’s fit and happy can fill that void as he’s a dangerous player on his day, but he’s had an up and down career,’ Pallister told MrCasinova.com.

‘But Ten Haag seems to have a connection with him that’s getting the best out of him and if we can keep him fit he’s going to be a danger, but we still need a back-up.’

Gakpo likely to be on the move in January (Picture: Getty)

He added: ‘His [Rashford’s] performances have made it a lot easier for Ten Hag as the balancing act was going on between him and Ronaldo, with Martial unfit for a large part of the start of the season.

‘But he worked hard in the off-season and that has paid off for him as he’s looking a real threat, which is the Marcus Rashford that we all loved in his early years at Manchester United, and he’s rediscovered that kind of joy and his work ethic to go and make things happen.

‘But Martial has had his injury problems over the years, so I still think we need a Gakpo or somebody else to replace Ronaldo.’

While backing a move for Gakpo, Pallister believes United should be firmly in the race to sign Kane in the summer, unconvinced Tottenham can win trophies this season with the England international desperate for silverware.

‘I’d chuck him into the mix again. I know that City was his dream and he has talked about winning trophies – are Tottenham going to win anything in the near future? I’m still suggesting no. Should Harry Kane be winning the biggest and best trophies with his ability? Yes he should.

‘He’s got another decision to make come the summer. He knows the Premier League and I think he’d be great at United. He’s not just about scoring goals, he can bring others into play and he’s very clever winning fouls, with his link play, he can assist – and he’s got that hunger to score goals.’