Gary Lineker fires back at foreign secretary’s warning for LGBTQ+ football fans to be ‘respectful’ in Qatar: ‘Don’t do anything gay?’ 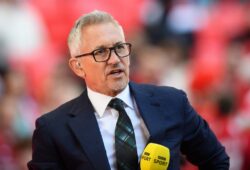 Gary Lineker has been outspoken about the World Cup being held in Qatar (Picture: PA Images Contributor/Press Association Images)

Gary Lineker has questioned the foreign secretary who urged members of the LGBTQ+ community visiting Qatar for the football World Cup to be ‘respectful’ to the host country.

The football event will kick off in the Middle Eastern nation on November 20 and will see 32 teams competing for the trophy, including England.

However, the decision to host this year’s World Cup in Qatar has received immense criticism with human rights groups scrutinising the treatment of local workers and the country’s criminalisation of same-sex marriage.

Foreign Secretary James Cleverly has since come under fire for advising LGBTQ+ football fans to show ‘a little bit of flex and compromise’ and to ‘respect the culture’ of Qatar while vising for the sporting event.

Match of the Day host Lineker retweeted a post about Mr Cleverly’s comments and wrote: ‘Whatever you do, don’t do anything Gay. Is that the message?’

When one of Linker’s followers commented: ‘The message is to respect Gary.. is it that hard to understand what’s wrong with ppl here,’ the former footballer replied: ‘By doing what?’

Whatever you do, donât do anything Gay. Is that the message? https://t.co/u7wf9tD4Xb

Mr Cleverly made his comments when asked about an incident involving veteran human rights campaigner Peter Tatchell, who was arrested after staging the first ever LGBTQ+ protest in Qatar to highlight its human rights abuses.

Mr Tatchell was questioned by police and eventually released, but said he had been subjected to interrogation.

Addressing the incident, Mr Cleverly told LBC radio: ‘I haven’t spoken with the government of Qatar in direct response to Peter Tatchell, but my understanding is that he was questioned, that he was supported by the FCDO’s consular team.

‘I have spoken to the Qatari authorities in the past about gay football fans going to watch the World Cup and how they will treat our fans and international fans.

‘They want to make sure that football fans are safe, secure and enjoy themselves, and they know that that means they are going to have to make some compromises in terms of what is an Islamic country with a very different set of cultural norms to our own.’

Lineker recently said the World Cup would be the perfect opportunity for a footballer to come out as gay (Picture: Ken McKay/ITV/Shutterstock)

He then added: ‘One of the things I would say for football fans is, you know, please do be respectful of the host nation.

‘They are trying to ensure that people can be themselves and enjoy the football, and I think with a little bit of flex and compromise at both ends, it can be a safe, secure and exciting World Cup.’

Lineker has already vocalised his feelings about Qatar hosting the World Cup, after recently saying it would provide the perfect opportunity for a gay footballer to come out.

‘It would be great if one or two of them came out during the World Cup. It would be amazing,’ he told The Mirror.

‘I know for a fact that some have been very close and contemplated it. There’s a couple I know, but obviously it’s not for me to say who they are.’

Earlier this month, Lineker was found to have breached the BBC’s impartiality rules with a tweet about former Prime Minister Liz Truss and the Conservative Party.

The Match of the Day host was responding to Foreign Secretary James Cleverly’s comments.