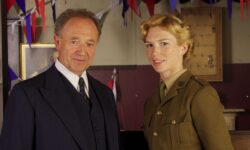 Foyle’s War star Honeysuckle Weeks told a court she drank and drove to flee a night of unwanted group sex.

The 43-year-old had been expecting to stay over at a male pal’s house after a night out in Arundel, West Sussex.

But she explained to Worthing magistrates: ‘The man in question invited his lover to the property and I was in danger of being coerced into sexual actions with them which I found extremely unwelcome.’

Weeks, of Byworth, got in her £30,000 Honda SUV and reversed into a parked car – witnessed by an off-duty police officer.

The court heard she was twice the legal limit. She admitted drink-driving and was fined £120, banned for 20 months and told to pay £85 costs.

The actress told the court she had no earnings at present and received Universal Credit.

‘I was in danger of being coerced into sexual actions.’