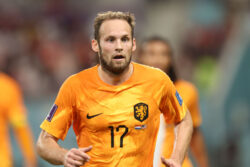 Daley Blind has made a big move late in his career (Picture: Getty Images)

Daley Blind has signed a six-month contract with Bayern Munich after mutually terminating his deal with Ajax at the end of last month.

The 32-year-old will play in the Bundesliga for the first time after bringing his second spell at Ajax to an end, with a stint at Manchester United in between those times with the Dutch giants.

The versatile defender, who can also operate in midfield, took his tally of Netherlands caps to 99 at the World Cup in Qatar and he will hope to add to his trophy cabinet in Munich.

‘I can’t wait to play here,’ said Blind. ‘We are now facing the most important part of the season, which is about the titles – and a club like Bayern can win any trophy.

‘The hunger for titles in the club was decisive for my decision. I hope I can use my experience to help the team and I will give my all for Bayern Munich.’

Bayern sporting director Hasan Salihamidzic added: ‘We are very happy that Daley is joining our team. Daley is a flexible defender who can play on the left as well as inside.

‘He has extensive international experience and leadership qualities. I’m sure he will help us.’

Blind was at Manchester United from 2014 to 2018, being a regular in the first team for three seasons before falling out of favour in 2017/18.

The veteran has been playing regularly for Ajax before his contract was terminated, making 13 league appearances for the Amsterdam side this campaign already.

What a switch for the experienced defender.