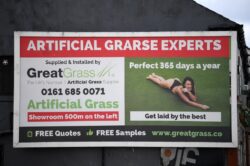 A business owner who was forced to take down an ‘inappropriate’ billboard has put up another one poking fun at those offended.

Mike Allen, owner of Great Grass MCR Ltd in Oldham, Greater Manchester, put up a billboard in November which said: ‘Artificial Grarse Experts. Perfect 365 days a year… Get laid by the best.’

The Advertising Standards Authority (ASA) ruled the billboard ‘objectified and stereotyped women as sexual objects’ and found it ‘irresponsible and likely to cause serious offence’.

At the time, the local company said the advertisement was a ‘bit of light-hearted fun and not intended to offend anyone’.

The new billboard ‘apologises’ to those who found the previous message offensive.

It states: ‘Apologies to the offended 4. You found it offensive, we all found it funny.’

The billboard features an angry face emoji followed by the number four, alongside a laughing face emoji next to 40,000,000.

‘Just because you’re offended, doesn’t mean you’re right,’ the ad continues. It ends with a promotional offer for people to quote ‘not offended’ to receive 10% off their next order.

The new ad pokes fun at those who are offended (Picture: MEN Media)

Mike says the original poster was up for months before anyone noticed, saying: ‘We’ve had that billboard spot for five years and no one has ever seen it but now that people have complained, everyone’s seen it.

‘It was never meant to be offensive and we’ve had thousands of comments telling us they found it funny. It’s been shared around the world and featured in loads of newspapers.’

Mike said he considered featuring a topless man in the new advert but eventually settled on poking fun at the haters.

‘I was just going to go back to doing a normal poster but then I thought, I’ll just say what everyone has said to us that they found it funny,’ he added.

He says the new poster has received a great response and he plans to keep it up.

He said: ‘In the end, it’s had a positive effect on us and it’s worked out in our favour.

‘We’ve turned it on its head and it’s been the best thing to happen to us.

‘In this day and age, with what’s going on in Ukraine and this country, there’s a million and one other things that we should all be worrying about instead.’