Ferris wheel bursts into flames with 62 people trapped in pods 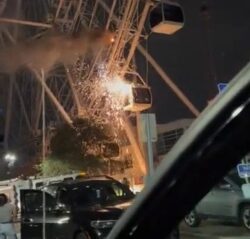 More than 60 people were rescued after a US Ferris wheel erupted in a shower of flames and sparks on New Year’s Eve.

The 400-foot ride lost power and began to smoke and spark, leaving 62 people trapped teetering in 20 pods above Icon Park in Orlando, Florida.

Passengers were reportedly stranded for three hours atop the theme park’s attraction, named The Wheel, before they were saved by firefighters.

Kimberly Conley, who filmed the incident, said she and her family heard a loud explosion, which ‘sounded like fireworks’.

Footage shows smoke billowing as watchers stand nearby, shining a light at a flame above one of the pods.

‘It’s on fire!’ a spectator can be heard shouting.

A loud explosion which ‘sounded like fireworks’ was heard from The Wheel (Picture: Storyful)

The fire service had to scale the 400ft ride to rescue passengers (Picture: Storyful)

He wrote: ‘Lights were visible in the cars for a short time, then a massive shower of sparks flew from the wheel.

‘Power was then lost to almost all of the cars, massive response from the fire department.’

Pryor recounted the fire service scaling The Wheel to rescue the trapped riders.

One carriage was flashing an SOS signal before the team reached them.

He added drones and helicopters hovered in the sky around the ride.

The park said in a statement: ‘The Wheel lost power Saturday night and we’re working with the Orange County Fire Department to safely evacuate guests.’

In March, a 14-year-old boy, Tyre Sampson, plunged to his death from the park’s FreeFall Drop Tower Ride.

Passengers were reportedly stranded for three hours before being rescued.