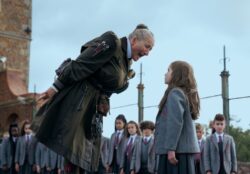 If you’re not anywhere else in the world, you’ve got a long wait until this new version of Matilda is on Netflix (Picture: Daniel Smith/Sony)

Fans keen to watch settle down and watch Roald Dahl’s Matilda the Musical with friends and family on Netflix over the Christmas holiday period were left sorely disappointed as they found out the hard way that the movie isn’t yet available.

The adaptation of the beloved children’s book, based on the successful RSC stage production that’s still running in the West End, opened the BFI London Film Festival with its world premiere back in October.

Fans in the UK and Ireland were then treated to an exclusive cinema release of the highly anticipated new musical on November 25, while its theatrical debut in the US followed on December 9.

What most fans were eagerly waiting for though was Matilda’s global release on Netflix.

It was announced for Christmas Day, December 25, as a gift to all fans.

Well, as it turns out, not all fans, as potential viewers in the UK and Ireland had overlooked one small but crucial detail in the film’s release information.

Taking to their Netflix accounts on Christmas Day and Boxing Day to enjoy some quality film viewing, many UK-based fans chose to seek out the new title and were then confused as to why they couldn’t find it on the streaming platform.

‘Was planning to watch Matilda the Musical last night but I awkwardly overlooked how it was released on Netflix internationally but not UK & Ireland ,’ tweeted one fan.

Another complained: ‘@NetflixUK why did you advertise Matilda The Musical being available on Christmas Day to a UK market, when it isn’t available? It’s a massive disappointment.’

‘Matilda being available on Netflix all over the world except the UK and Ireland is honestly one of the biggest jokes of all time,’ a third mused.

@NetflixUK why did you advertise Matilda The Musical being available on Christmas Day to a UK market, when it isnât available? Itâs a massive disappointment

Its wild Netflix can advertise stuff for months to attract subscriptions and then not release the content, facing no action. They just Star Trek Discoverie’d the new Matilda musical in the UK – on Xmas day. Ridiculous.

Matilda not being released on UK Netflix on Christmas Day contrary to prior marketing sounds exactly like one of the Trunchbull’s tricks. #MatildaTheMusical pic.twitter.com/I1Aqd7d6jM

Matilda is currently showing in cinemas in the UK and Ireland as a release distributed by Sony Pictures UK and TriStar Pictures.

The movie’s worldwide release announced for Christmas excluded these territories, meaning we have to hold on longer to see the film on Netflix.

And it’s not good news – at the beginning of December the Netflix UK and Ireland release date, still to be confirmed, was pushed to ‘Summer 2023’, meaning a months-long wait for fans here.

However, social media users were fuming as they discovered this information, seemingly feeling that it hadn’t been widely communicated enough.

As one fan wailed that they ‘can’t wait that long’, another added: ‘Matilda not being released on UK Netflix on Christmas Day contrary to prior marketing sounds exactly like one of the Trunchbull’s tricks.’

‘It’s wild Netflix can advertise stuff for months to attract subscriptions and then not release the content, facing no action,’ accused one thwarted viewer.

‘They just Star Trek Discoverie’d the new Matilda musical in the UK – on Xmas day. Ridiculous.’

However, one fan couldn’t understand the confusion.

‘I’ve seen a lot of people today and yesterday say that the UK is being punished for not releasing Matilda The Musical on Netflix like the film wasn’t released a month ago in cinemas before anyone else and is still out now,’ they reasoned.

‘I do understand that it is a bit confusing to see Netflix Christmas Day ads for the film but both Netflix and Sony have always specified that the UK release is the cinema first before Netflix in summer 2023.’

The stage musical won nine Olivier Awards after it opened in 2011, setting a record for the time.

Metro.co.uk has contacted Sony Pictures and Netflix UK for comment.

Matilda The Musical is currently in cinemas in UK and Ireland.