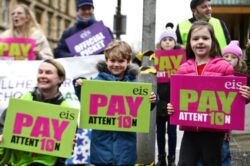 A secondary school teachers’ strike over pay in Scotland means preliminary exams have had to be rescheduled for some Scottish pupils.

The walkout follows the closure of almost all primary schools on Tuesday.

Shirely-Anne Somerville told MSPs on Tuesday that she would leave “no stone unturned” to bring about a quick end to the strikes. But the education secretary admitted that there was still “some distance” between the two sides.

Mike Corbett (NASUWT) told PA news agency that it would be a small number of schools that will have to reschedule their exams. He said that the change of date has not caused “any particular problem” for those schools.

Union members have rejected a 5% pay increase, arguing for 10% – something the Scottish government and councils have said is unaffordable. The latest pay offer from the government includes rises of up to 6.85% for the lowest-paid staff.

Recent negotiations have been positive and unions are hoping a new offer will be made soon.

But for now, teachers are planning to strike for a further 16 days – beginning next week. The strike action will see consecutive days of action, split across every council in the country.

Teachers in two local authorities will strike on each of the 16 days.

Some pupils were due to sit preliminary exams on Wednesday. They have now been postponed while revision schedules have also been disrupted.