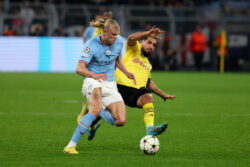 Erling Haaland only managed 45 minutes against his former side on Tuesday night (Picture: via Getty Images)

Manchester City manager Pep Guardiola says he had three concerns over Erling Haaland’s fitness, which is why the striker was taken off at half-time against Borussia Dortmund on Tuesday night.

The Champions League clash in Germany ended goalless, with City’s Riyad Mahrez missing a penalty just before the hour mark, but the Premier League champions will not be too fussed as they were confirmed as Group G winners.

However, there was concern over their star striker, with Haaland not returning for the second half, replaced by Bernardo Silva at the break.

With the Norwegian scoring 17 goals in his first 11 Premier League games, and five in four in the Champions League for City, it is a big worry for Guardiola, who says the 22-year-old was dealing with three different issues.

‘Three things: I saw him so tired,’ explained the City boss. ‘The second one he had a bit of a fever, like Joao [Cancelo]. The third, he had a knock in his feet. That is why he wasn’t able to play in the second half.’

Asked whether Haaland is likely to be sidelined, with Manchester City facing Leicester in the Premier League on Saturday, Guardiola could not confirm, but was reassured by how the forward was looking at the end of the match.

‘I don’t know right now,’ said the Spaniard. ‘They were a little bit concerned at half-time but I saw him walking OK at the end.’

Cancelo was also removed at the break, replaced by Manuel Akanji, with Guardiola confirming that the full-back was not well. He too could well be available for Leicester on Saturday at 12.30pm, but the City staff will wait and see.

Guardiola will be pleased to have sewn up top spot in their Champions League group with a game to spare as they have a busy period before the break for the World Cup.

Three more Premier League games including the last one before the break on 12 November, with one more Champions League match and a meeting with Chelsea in the League Cup, all in less than three weeks.

Haaland only lasted 45 minutes against Dortmund.