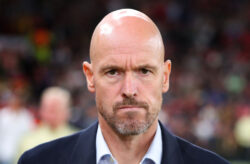 Casemiro’s injury-time header earned United a point at Stamford Bridge on Saturday evening after Jorginho’s penalty gave Chelsea a lead in the 87th-minute.

England international Sancho started for the Red Devils but was replaced by central midfielder Fred shortly after half-time.

Sancho has scored three goals in 14 appearances this season and former Aston Villa star Gabby Agbonlahor believes it is time he was taken out of the team.

He told talkSPORT: ‘I just want to speak about Sancho because when I watch Man United I look at Antony, I look at Rashford, I look at Fernandes and they look like they want to take a player on and want to do something and take responsibility in the attacking third.

‘Sancho, he gets the ball and passes it backwards. If I was Luke Shaw I’d say “stop passing it back to me, I’m giving you the ball so take someone on”.

‘At Dortmund he was doing it every week. His confidence is that low, does he feel like he doesn’t have the speed or the trickery to get past someone?

‘He’s being brought off after 52 minutes for Fred. Fred was unlucky not to start because he did very well last game but it just shows that they’ve had to play Fernandes up front for the last 35 minutes, Rashford went to the left and Antony stayed on the right because Sancho can’t perform.

‘How many times do you have to play him? If you’re Ronaldo you’re probably thinking “how many chances is this guy going to get?”

‘Elanga, how many times is Sancho going to get the chance to play for Manchester United because he’s not performing and he’s a million miles away from a chance to play at the World Cup.’

Cristiano Ronaldo did not travel with the Manchester United squad to west London as punishment for leaving United’s Premier League win over Tottenham early.

But Agbonlahor believes the Red Devils missed Ronaldo against Chelsea and says his return would allow Marcus Rashford to replace Sancho on the left-hand side.

He added: ‘Ronaldo deserved to be left out for this game, it was the right punishment but going forward this is why Ten Hag has said that he wants Ronaldo for the season.

‘This is the sort of game where they’re missing Ronaldo. It’s not working with Sancho on the left. Antony I like, Rashford could be pushed onto the left with Ronaldo up front because Sancho doesn’t take anyone on.

‘This is the perfect game to say ‘Cristiano, come on and do your business’ like he did against Everton when he came on and scored.’

‘How many times do you have to play him?’