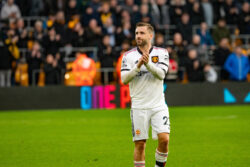 Erik ten Hag has hailed the ‘fantastic’ performances of Luke Shaw since the defender moved inside to become an emergency centre-back.

With Lisandro Martinez on leave after Argentina’s World Cup victory and Harry Maguire and Victor Lindelof suffering from illness, Shaw was forced to deputise as an auxillary centre-back against Nottingham Forest and Wolves.

Shaw was dropped earlier in the season for Tyrell Malacia after disappointing performances in defeats against Brighton and Brentford.

However, the Englishman has recovered his spot with a string of fine displays and he’s rebuilt his partnership with Marcus Rashford down United’s left flank.

Martinez’s performances at left centre-back have been superb, with the Argentine showing his full passing range from deep alongside Raphael Varane.

Shaw shares many of Martinez’s qualities, being left-footed, speedy and good in possession.

And Ten Hag says Shaw’s ‘fabulous’ performances at centre-back have proved he’s now an ‘option’ there for the future.

Shaw was picked ahead of Maguire (Picture: Getty)

‘We have seen the last two games. I think he did fabulous and was impressing, but we know also he is really good as a left full-back but it’s an extra option and [that] is always good for a team,’ said Ten Hag.

‘Of course you have your ideas, and a plan, but sometimes it changes by circumstances like illnesses from Harry [Maguire] and from Victor [Lindelof].

‘Normally they should have started in the games we just played, but then Casemiro did well as a centre-half, Luke Shaw against Forest did very good, and also you look into the game plan, the way we have to approach Wolves, and I thought it was the best match with Rapha [Varane] and Luke.

‘Especially defending wise, we know the speed from Wolves over on the right side, and he [Shaw] could cover that because we want to attack over on the left side with offensive game from Tyrell Malacia so that was a good fit. And also in possession, you always – with a left foot – get better angles on the pitch.’

He’s been in superb form.