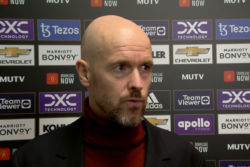 Pellistri, who featured for Uruguay at the Qatar World Cup, made a late cameo in the cup victory and provided the assist for Rashford’s first goal.

United signed Pellistri from Uruguayan club Penarol in 2020 but the 21-year-old was making his Red Devils debut against the Addicks, having spent the majority of the last two years at Spanish outfit Alaves.

Pellistri has been linked with another loan move this month but Ten Hag has suggested he could keep the highly-rated youngster at Old Trafford and rely on him during the second-half of the season.

‘I see a future in [Pellistri],’ said Ten Hag. ‘He is doing really well, we will have to see what is best for him but he is progressing.

‘He is coming on and having an effect, that is the next step. I have to say well done to him and keep going.’

While Ten Hag was full of praise for Pellistri, he remained coy about Manchester United’s move for Netherlands striker Wout Weghorst.

United are expected to sign Weghorst on loan from Championship side Burnley, with the 30-year-old currently on a temporary deal at Besiktas.

Asked if he could provide an update on Manchester United’s move for Weghorst, Ten Hag said: ‘No, unfortunately, I can’t.’