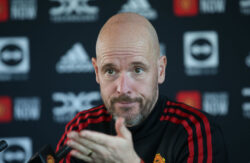 Manchester United manager Erik ten Hag says he is not satisfied with his team’s Europa League campaign so far, always focussing on winning the next match instead of resting on his laurels.

The Red Devils have already secured progression to the knockout stages with two games to play in their group, although they sit second behind Real Sociedad after losing to the Spaniards in the opening contest.

United host Sheriff Tiraspol on Thursday before traveling to Sociedad next week to complete their group matches and Ten Hag wants to see more improvement from his side.

While clearly results are important in Europe, the Dutchman says he has been using the Europa League as a good opportunity for his team to develop and learn as he implements his plans.

‘It’s [only] four games and Europe is obviously different,’ Ten Hag told Manchester United club media. ‘But I like Europe. I like the European mindset, especially in the last game against Omonia when there was a great atmosphere in the stadium and then at the end when we scored the winner, it was really good to celebrate that, the players with the fans, and I hope we have that as well tomorrow.

‘The games in Europe, we all use them to get better, to improve and that is what we have to do.

‘We are not satisfied, we are happy with some of our performances, some of our results, but after 24 hours, we keep going and we come to the next one. We have to approach every game and see also in this moment where we are in the season.

‘We have to win every game so you need one hundred percent preparation and focus.’

‘We are not satisfied.’