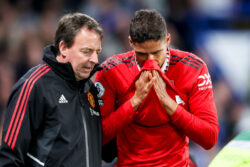 Manchester United defender Raphael Varane reportedly suffered a serious injury against Chelsea, which could rule him out of the World Cup.

Early in the second-half at Stamford Bridge, Varane was forced off after rolling his ankle attempting to cut out a pass aimed at Pierre-Emerick Aubameyang.

He left the pitch in tears, punching the corner flag in anger and pulling his shirt over his face to cover his anguish.

He was replaced by Victor Lindelof, with United going on to snatch a late equaliser courtesy of Casemiro’s first goal for the club.

All signs point to a serious and lengthy injury for Varane, which could be devastating for the France international with the World Cup less-than a month away.

United boss Erik ten Hag provided an update post-match, though as expected, full details on the injury are not known just yet.

‘Nothing in this moment,’ the Dutchman, who consoled Varane as he went off, said.

Varane was consoled by Ten Hag as he left the pitch (Photo: Getty)

‘We have all seen he came off but with an injury like this we always have to wait a minimum 24 hours and the medical staff can do their job and can set the diagnosis.

‘I can understand [his reaction], we can all probably understand he will be emotional but he also has to wait, you don’t know.

‘He’s experienced but the medicals have to do their job, have to make an assessment, set the right diagnosis and from there on come to the conclusion.’

But according to reports, the injury could well be as bad as feared, with L’Equipe journalist Loic Tanzi claiming that the 29-year-old: ‘Is affected in the hamstrings. We do not yet know the severity of the injury.’

Varane had been enjoying the best form of his United career until this point and his loss will be felt not only by Ten Hag but also France manager Didier Deschamps given the vital role he has played for his country over the past five years.

Varane left the pitch in tears during United’s draw at Chelsea.