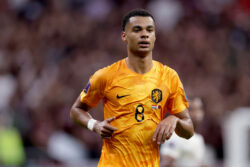 The Dutchman, 23, was close to a move to Old Trafford last summer before United decided to prioritise a move for Ajax winger Antony.

Gakpo was understandably saddened but that hasn’t affected his form this term, with the Dutchman scoring 14 times in 23 matches.

Ruud van Nistelrooy, the PSV manager, admitted last week that Gakpo could leave in January as ‘there comes a time when you can’t say no’.

‘I enjoyed watching him [at the World Cup] and he deserves this because of how he has behaved, how he has continued to work and continued to perform,’ said Van Nistelrooy.

‘I was able to help him from very close by and that makes me proud. And then I’ll give him his path when it comes.

‘If I have the choice, I prefer the summer, but it can also be now. You just know there comes a time when you can’t say no.’

Van Nistelrooy’s comments suggest Cody Gakpo deal is getting close? ‘I think you can say that about MANY players!’ | Erik ten Hag pic.twitter.com/MTdjZC6pNl

Those comments were put to Ten Hag following United’s 2-0 win against Burnley in the Carabao Cup.

And, while the usually blunt Ten Hag couldn’t hide a smile as he was asked about Gakpo, he played down any move for the Dutchman.

‘There were many many good players in the World Cup,’ Ten Hag said.

‘He (Van Nistelrooy) can say that about many players.’

United’s interest in Gakpo has risen since the club decided to part ways with Cristiano Ronaldo.

The 37-year-old’s departure means Anthony Martial is the club’s only recognised centre forward and though Gakpo can play in a number of positions, he prefers playing centrally.