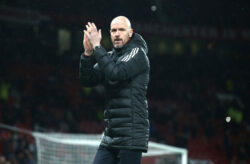 Both Erik ten Hag and Marcus Rashford made history on Tuesday night in Manchester United’s Carabao Cup win over Charlton.

United advanced to the semi-finals with a 3-0 victory over the League One side courtesy of a stunning strike from Antony and a late brace from Rashford.

It was an important victory for the Red Devils who are now one step closer to ending their trophy drought which stretches back to 2017.

But the result is also a significant one for Ten Hag as it marked his 20th win since taking over the club, and having achieved it in just 27 games he is now the fastest United manager to reach that milestone.

The previous record was held by Jose Mourinho who took 31 games to reach 20 victories.

It’s an incredible feat for Ten Hag and one that many would have thought unlikely when he lost his first two games in dismal fashion to Brighton and Brentford back in August.

The manager wasn’t the only one getting in the record books last night, as Rashford surpassed Wayne Rooney’s record by scoring in eight consecutive home games.

The 25-year-old has been in formidable form this season, with his two injury time goals against Charlton bringing his tally to 15 for the campaign so far.

His goal scoring run at Old Trafford began in October against Sheriff Tiraspol in the Europa League and was followed in league and cup games against West Ham and Aston Villa.

After the World Cup break, the England forward picked up where he left off, scoring against Nottingham Forest and Bournemouth in the Premier League, Everton in the FA Cup, and Burnley and now Charlton in the Carabao Cup.

But while he has beaten Rooney, Rashford is still one shy of United’s all-time record for scoring in consecutive home games, set by Dennis Viollet all the way back in 1959.

Rashford’s first opportunity to go level with the iconic Busby Babe will be on Saturday against rivals Manchester City.

An incredible achievement for the United boss.