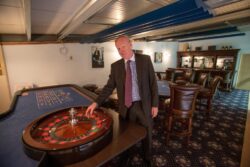 Graham Wildin built the leisure centre in his back garden for himself and his family (Picture: SWNS)

A millionaire who illegally built ‘Britain’s best man cave’, angering courts and his neighbours, seems to be finally bowing down to public pressure.

Graham Wildin has spent years refusing to dismantle a 10,000sqft extension to his house with a cinema, squash court, bowling alley, private bar and casino.

The luxury complex in the Forest-of-Dean, Gloucestershire, was first built in 2013 without a planning permission – and has been an issue ever since.

After losing a High Court battle, the 70-year-old was jailed last year for failing to comply with an order to decommission the building.

He was given 18 weeks from his release to comply with a previous order to make the giant leisure complex unusable by ‘soft stripping’ it.

As Wildin only served around half the six week sentence imposed on August 12, 2022, the 18 weeks from his release was up on Friday.

Removal vans were spotted outside the property, finally being loaded with stuff.

But neighbours remain cynical the entire man cave will ever be demolished, and they would get peace.

‘He has got a couple of white vans there, and we think he’s been putting stuff in them,’ a neighbour, who wishes to remain anonymous, said.

‘He loads some items into them, they’ve not moved at all in that long, but we are under the impression that as soon as the council comes to check if the interiors of the building have been stripped – he’s gunna put everything back in again.’

They added: ‘Wildin thinks he’s being clever – but he’s not that clever. We can see everything he does.

‘He’s had people there working, so I think they’re probably clearing it out for him into the vans.

Aerial view of Wildin’s man cave, which was built in 2013 (Picture: SWNS)

The extension has been an issue for neighbours ever since (Picture: SWNS)

‘A lot has been going on there this week but he’s had 18 weeks to do this so I’m assuming something is being done.

‘In the meantime his cars are still there, he parks his sports cars all up and down the road to make life as difficult as possible for all of us.

‘It makes parking our cars a nightmare, especially if we have more than one car.

‘I don’t expect the council will turn up today, they usually leave it a few days, but I expect when they do sometime next week he’ll just replace it all.’

Another resident said that they had ‘no idea’ what was going on in there but they had seen people entering and exiting the gated ‘mansion’.

Council officials have vowed to continue the planning battle not just to ‘soft strip’, but to get rid of the entire complex.

The Forest of Dean District Council has made it clear it is not planning to drop the row over the leisure centre at Meendhurst Road.

A spokesperson said: ‘This is an ongoing legal matter and the council will continue to pursue it.’

‘He’s not that clever. We can see everything he does.’