Emmerdale spoilers: Will and Kim reunite after murder accusation 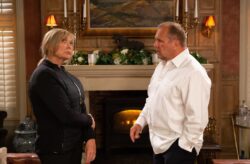 We were about to call Will Taylor (Dean Andrews) and Kim Tate’s (Claire King) wedding the shortest in Emmerdale history but thankfully – last night’s episode just represented a brief moment of doubt.

Why? We hear you ask.

It’s a standard thing in this village honestly, don’t read into it too much.

Harriet’s death happened at the start of the week, during the huge storm.

She had been injured while driving her quad bike, but after a lightning bolt struck the vehicle and exploded, Harriet’s deteriorating health left Kim fully aware there wasn’t anything she could do to save her.

This led to Kim walking away and heading back to Home Farm, telling Will, Dawn (Olivia Bromley) and Billy (Jay Kontzle) that she was seemingly the last person Harriet saw.

The previous scenes leading up to Harriet’s death led Will to wonder if Kim left her enemy deliberately and last night, went as far as accusing her of murder.

Tonight, as the aftermath continued, Will discovered from Dan (Liam Fox) that a post-mortem confirmed Harriet was killed almost instantly when the explosion happened.

Feeling guilty, Will headed back to Home Farm and apologised to Kim but at first, it didn’t look as though they were going to get back together.

Will begged for forgiveness and Kim smirked when he called her Mrs Taylor – they accepted they would face ups and downs during their marriage, and then reunited.

Will and Kim offering us the ultimate guide to a romantic relationship.