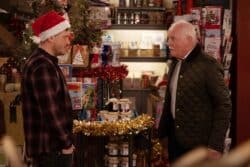 David (Matthew Wolfenden) was shocked in last week’s Emmerdale when he found Jacob (Joe-Warren Plant) in a pool of blood after he’d been stabbed by evil drug dealer Callum.

Jacob had arranged to meet Callum to warn him off supplying drugs to Leyla (Roxy Shahidi), but the situation quickly got out of control as the knife Jacob had brought was turned on him.

The attack on Jacob caused a massive amount of worry to the whole family, including Leyla, David and Pollard (Chris Chittell) who waited anxiously as Jacob underwent surgery.

Before this, Pollard had been making plans for his retirement after telling Bernice (Samantha Giles) that he and Brenda (Lesley Dunlop) were planning to give up running the B&B and offering her the job of manager.

In upcoming episodes, Pollard puts these plans on hold. Knowing that David has been worried about money for a long time, and particularly since the storm, Pollard makes a life-changing decision for his son.

Charity’s wedding horror and all over for Kyle: Emmerdale 2023 preview

He decides to put his retirement plans on hold so he can buy David’s shop, meaning his son will be able to keep his home and his business. Pollard hopes thais can provide some stability for David’s family and a secure roof for Jacob as he recovers from the attack.

David, although he’s grateful, is full of guilt when he discovers that his father has put the money he was counting on for his retirement into saving the shop.

Will Pollard regret his decision?

Eric offers him a get out of debt card.