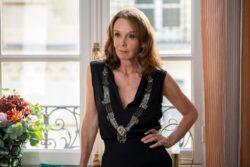 Philippine Leroy-Beaulieu has become a favorite with Emily in Paris fans, starring as outrageous, fashionable and savage businesswoman Sylvie Grateu.

However, the 59-year-old revealed that she was initially told she was ‘too old’ to secure her part on the series – which was set to debut on Paramount before being purchased by Netflix in 2020.

Ahead of the release of season three on December 21, she appeared for a screening and a talk at 92NY, to discuss the hugely popular series – also starring Lily Collins, Ashley Parks and Lucien Laviscount.

When host Reshma Gopaldas asked about the audition process, Philippine candidly explained why she was immediately drawn to Sylvie.

‘The audition was very simple…,’ she said. ‘The casting director called me and said, “I have a part to cast, but you’re not… You’re much too old for the role. But you should read the sides because you can read for this. I don’t know if you’ll get it because obviously they’re casting 35-40-year-old women.”

Philippine Leroy-Beaulieu has opened up about auditioning for Sylvie (Picture: Netflix)

‘I got the sides and started reading them, and said, “I know this woman so well.” I know her because my mother used to work in fashion. As a teenager, I’ve met so many Sylvies. And my mother was a bit of a Sylvie, too.

‘I read it and then, for a month and a half, I didn’t hear anything from anybody. I thought they went for a younger actress. Then I got a call back and I was so surprised.

‘Darren [Star, creator] was in Paris, and that was super intimidating. What he saw was my vulnerability at that moment. He told me last year that that’s why he chose me, because he saw the vulnerability. He didn’t want Sylvie to be just a one-sided character.

We couldn’t imagine anyone else playing Sylvie(Picture: Netflix)

‘I was surprised but not really, as I’ve said before, it was just perfect.’

Thankfully, she wasn’t turned off as we couldn’t imagine anyone else in the role.

Emily in Paris is returning to our screens this week, picking up right where the second season ended off – with the American fashionista struggling to decide between staying at Savoir or leaving to help Sylvie with her new agency.

Will you be watching Emily in Paris season 3?Comment Now

As ever, she is also caught up with drama between Gabriel (Lucas Bravo) and her budding romance with Alfie (Lucien Laviscount).

Lifting the lid on what the next series has in store for Emily, Lily warned viewers to expect yet another massive cliffhanger as her character continues to navigate life in Paris.

‘Well, I can say that Emily makes a decision, and for the first part of the season, we get to see her really exploring one specific path,’ she told EW. ‘But then, in the sixth episode, you start to see it kind of veer.

‘And in the finale, it all kind of blows up.’

‘There’s about five different things that happened in the span of however many minutes that all of a sudden makes you wish there was a season 4 right away,’ she teased.

‘But it definitely will leave you guessing.’

Metro.co.uk has contacted reps for Paramount for a comment.

Emily in Paris season 3 is available to stream on Netflix from December 21.

Emily in Paris season three is landing on Netflix this week,