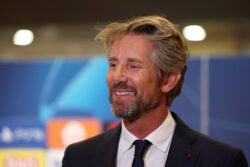 Edwin van der Sar insists he is ‘not finished’ at Ajax after being linked with a return to Manchester United.

The former United and Netherlands goalkeeper is currently Ajax’s chief executive, but he has been heavily linked with a move back to Old Trafford to be part of the club’s restructure behind the scenes.

However, Van der Sar has indicated that he has no intention to leave Ajax just yet.

‘I have a good relationship with the board and I had a fantastic six years in Manchester, but I’m not finished here yet.’

Van der Sar also admits that he felt both Antony and Lisandro Martinez should have remained at Ajax for another season.

Instead, the duo were reunited with Erik ten Hag as United spent over £140 million on bringing them to Old Trafford.

‘It was our opinion they should stay for another year,’ Van der Sar said of Antony and Martinez.

‘We gave a firm ‘no’ to Arsenal when they came first for Lisandro; we fought hard to keep him.

‘It was [an] economic [decision] but it was a hard one to take. We knew there was interest but not at that level and it was too late to find a good replacement.

‘I don’t think the way [Antony] handled it was the correct one, but it’s important all the players who leave Ajax have success because it reflects well on us.’

‘I have a good relationship with the board and I had a fantastic six years in Manchester.’