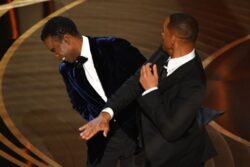 It’s been almost a year since the controversy of Will Smith slapping Chris Rock at the Oscars rocked Hollywood, leading to the King Richard star’s 10-year ban from the event.

Now that award season has come back around, it seemed inevitable that there were going to be plenty of references to the fall-out, including jokes made at the actor’s expense.

At last night’s Golden Globes, Eddie Murphy took advantage of his time on the stage to do just that, using his own award acceptance speech to revisit the past.

The event saw the 61-year-old receive the coveted Cecil B DeMille award, which he was given by comedian Tracy Morgan and Everything Everywhere All At Once star Jamie Lee Curtis.

The recognition is awarded by the Hollywood Foreign Press Association for ‘outstanding contributions to the world of entertainment’, with past recipients including Tom Hanks, Meryl Streep, Oprah Winfrey, Denzel Washington and Morgan Freeman.

As Murphy took to the stage, having won a Golden Globe in 2007 for Dreamgirls and been nominated on five other occasions, he looked back on his illustrious career.

The entertainment world was left in shock over the slapping incident (Picture: Robyn Beck/AFP via Getty Images)

‘I’ve been doing this for a long time, so I can literally stand up here and keep saying thank you until they play the piano,’ he said.

‘But I’m gonna wrap it up and just say something to all the new up and coming dreamers and artists that are in the room tonight.’

The Trading Places star explained that he had a ‘definitive blueprint’ that he’s followed in his life, and he wanted to impart his wisdom on the audience.

‘I want to let you know that there is a definitive blueprint that you can follow to achieve success, prosperity, longevity, and peace of mind,’ he stated.

The actor received a prestigious award at the event (Picture: Rich Polk/NBC via Getty Images)

‘There’s a blueprint and I followed it my whole career, it’s very simple.

‘There’s three things… just do these three things: Pay your taxes. Mind your business, and keep Will Smith’s wife’s name out of your f**king mouth!’

The final point in Murphy’s list was a reference to the statement Smith made last year after slapping Rock.

Rock had made a joke about Jada Pinkett Smith on stage at the Oscars, mocking her shaved head by comparing her to ‘G.I. Jane’ amid her alopecia diagnosis.

Best Picture, Musical or Comedy: The Banshees of Inisherin

Best Performance by an Actor in a Motion Picture, Drama: Austin Butler (Elvis)

Best Performance by an Actress in a Motion Picture, Drama: Cate Blanchett (Tár)

Best Performance by an Actress in a Motion Picture, Musical or Comedy: Michelle Yeoh (Everything Everywhere All at Once)

Best Performance by an Actor in a Motion Picture, Musical or Comedy Colin Farrell (The Banshees of Inisherin)

Best Supporting Actor – Motion Picture: Ke Huy Quan (Everything Everywhere All at Once)

Best Performance by an Actor in a Television Series, Drama: Kevin Costner (Yellowstone)

Best Performance by an Actress in a Television Series, Drama: Zendaya (Euphoria)

Best Limited Series, Anthology Series or a Motion Picture made for Television: The White Lotus (HBO)

Best Performance by an Actress, Limited Series, Anthology Series or a Motion Picture made for Television: Amanda Seyfried (The Dropout)

Best Performance by an Actress in Supporting Role, Limited Series, Anthology Series or a Motion Picture made for Television: Jennifer Coolidge (The White Lotus)

Smith walked onto the stage and slapped Rock across the face, before returning to his seat and shouting: ‘Keep my wife’s name out your f**king mouth!’

Smith later apologised to Rock, before releasing a video apology months later, in which he said: ‘My behaviour was unacceptable.’

‘So I will say to you, Chris, I apologise to you. My behaviour was unacceptable and I am here whenever you’re ready to talk,’ he said at the time.

The incident happened almost a year ago.