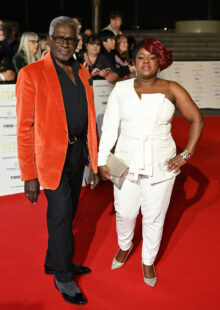 EastEnders star Rudolph Walker has confirmed that Patrick Trueman is most definitely here to stay, as he ruled out the idea of retiring.

The actor, 83, has become an absolute soap icon after first appearing on Albert Square in 2001.

Chatting to Metro.co.uk at the Pride of Britain Awards, Rudolph said: ‘Retiring? What’s that?! No, I enjoy it, I enjoy being there, I enjoy working.’

‘Of course I can’t reveal if there’s anything coming up!’

Meanwhile, he and the cast are still clearly all the best of pals, as he went on: ‘You talk to any of the actors on EastEnders, we just enjoy working together.’

Rudolph was last year awarded a CBE for his services to drama and charity.

He was honoured with the award by King Charles, who was Prince of Wales at the time.

Rudolph said at the time that Charles made everyone feel ‘extremely relaxed,’ but revealed that he briefly mixed up EastEnders with Coronation Street.

‘He was interested in the show, he knew that I had been in it for a long time and that, here I am at the ripe young age of 81, going on to 82, still doing it and still enjoying it,’ he told the PA news agency.

‘It was very relaxing, he made us feel extremely relaxed and he was interested in the fact that I am still plodding on.

‘He spoke about Coronation Street and I said “No, no, you’re talking about the opposition. Let’s talk about EastEnders”.

‘He just laughed and said “I do understand, I do apologise” but it was done very lightheartedly.”

The Daily Mirror Pride of Britain Awards will air on ITV on October 27 at 8pm.