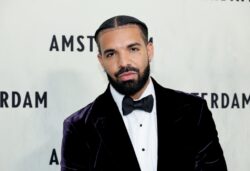 Drake seems to have addressed a viral video where a woman claimed to have slept with him (Picture; Getty Images)

Drake has dismissed a woman who claimed he treated her badly after they slept together with a cryptic post on Instagram.

The One Dance singer, 36, is known for his often emotional and love-lorn songs, however this image was tarnished to some this week when a woman made a TikTok telling what she claimed was a true story about him.

In the video, the woman said Drake direct messages her after she made a video clad in lingerie mentioning the singer, and said after talking for a while he booked her a flight to come see him.

She claimed he first made her sign an NDA and then began asking her if she wanted kids, before they then had unprotected sex.

The TikTok user went on to claim that he became angry when she began video recording him and slapped the phone out of her hands before kicking her out of his house.

While the woman’s video and claims went viral, Drake has now seemingly replied to the claims – dismissing them entirely.

The rapper was accused of kicking the woman out of his house when she started recording him (Picture: Wireimage)

The star took to his Instagram stories this week where, while not addressing the woman directly, he issued a cryptic statement that seemed like he was only talking about one thing.

He added:’I hope people start doing more with the one life we are given, s*** is sad out here.’

Drake seemed to address the claim on his Instagram (Picture: Drake)

The bizarre story comes after known romantic Drake was seen wearing a necklace with 42 diamonds – each one representing a time he considered proposing to a woman.

Designed by luxury New York-based jeweller Alex Moss, the necklace is set in 18K white gold and features a staggering 351.38 carats in diamonds.

In an Instagram post, the designer shared a video of the necklace shining in all its glory, alongside the caption: ‘New piece titled “Previous Engagements” for all the times he thought about it but never did it.

The woman had made a viral video featuring the claims.