Drag Race star Eureka O’Hara comes out as transgender: ‘I know who I am without question’ 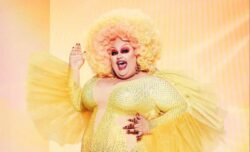 RuPaul’s Drag Race alumni Eureka O’Hara has come out as a transgender woman after struggling with her gender identity for years.

The American drag queen first appeared in the ninth season of the franchise back in 2017, but had to be sent home after suffering a knee injury.

She was brought back the following year, eventually placing as runner-up.

Since then, she has also competed on Drag Race All Stars and the Drag Race Holi-slay Spectacular.

Eureka, 31, has now opened up on discovering who she is ‘without question’.

Eureka has said her transition has been ‘magical’ (Picture: Theo Wargo/Getty Images for VH1 Trailblazer Honors)

‘It’s been really magical and it’s been probably the easiest transitional and coming out journey that I’ve ever been on,’ she said.

‘I hope my story teaches people that gender is a journey, and we are ever-evolving people.’

It was while filming her series We’re Here, alongside fellow Queens Shangela and Bob the Drag Queen, that she made the move to transition.

Meeting two trans people inspired her to re-examine her own identity.

One of them had transitioned later in life, which forced Eureka to realise she didn’t want to ‘lose’ years of living as her true self.

Eureka previously identified as a gay cisgender man, then lived as a transgender woman from ages 18 to 22, before eventually identifying as non-binary.

However, she said that as a child she remembered going to sleep crying and ‘praying to wake up a girl’.

But drag allowed her to ‘be a woman’ and provide a safe place to get to know herself.

Eureka has legally changed her name to Eureka D. Huggard, taking her drag name (which was inspired by her mother, Ulrike) and adding a nod to her birth name (David Huggard).

She has been on hormone replacement therapy for seven months and is also taking the steps toward a physical transformation to work towards ‘being the woman I want to be’.

Speaking about the ongoing bigotry and discrimination the LGBTQ+ community was facing, she acknowledged how serious it was, but also expressed her optimism that people were ‘rooting for us’ and that it gave her hope that people were ‘fighting and standing up and showing up’.


MORE : Who’s in the cast of RuPaul’s Drag Race season 15? Meet the glamorous cast, including the franchise’s first-ever twins

‘I hope my story teaches people that gender is a journey’.