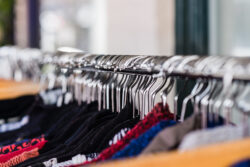 Not a week goes by without a scandalous headline about the fast fashion industry (Credits: Getty Images)

Years ago, I treated myself to a lovely blue summer top from a fast fashion outlet –  but once I brought it home, I hardly ever wore it.

Every single time I looked at it, I had an uneasy feeling that somewhere in that supply chain, workers had been exploited while making my new garment. I didn’t know what to do about it and it just felt easier to leave it in the back of the wardrobe and pretend it didn’t exist.

And I’m not alone. A third of British shoppers polled last year said they felt guilt associated with the clothes that they buy – and it’s easy to understand why.

Not a week goes by without a scandalous headline about the fast fashion industry.

In the past year, we’ve heard that high street brands’ waste is being burned, causing toxic pollution in Cambodia, and that the Competition and Markets Authority are now investigating ASOS, George at Asda and Boohoo amid concerns over greenwashing (deceptively persuading the public that an organisation is environmentally friendly).

We’ve heard how crumbling fast fashion giant Missguided owed millions to its clothing suppliers, that poor working conditions are still prevalent in Leicester and that workers were shot dead outside a footwear factory in Myanmar in 2021.

It’s good that the ugly truth behind fashion’s pretty face is coming out – what’s not so good is that most of the coverage focuses on what we, as consumers, should be doing about it. We’re advised to shop ethically, investigate the companies we buy from, buy less, buy second-hand, swap, and rent our clothes.

These are all great ideas, and I do some of these myself (I love charity-shop treasure hunting when I have the time), but pointing the finger at citizens is also a very convenient tactic, knowing that most of us will lack the time, money, or information to make the right choices.

But now, with a cost-of-living crisis it’s harder than ever for us all to do the right thing. It means that many of us are carrying around an uneasy guilt that we should be doing more, and that somehow, it’s all our fault.

A similar approach was taken on the climate until a few years ago when finally, the finger got pointed squarely at fossil fuel giants after years of admonishing citizens on their individual carbon footprints and shopping choices. When you’ve heard UN Secretary-General Antonio Guterres describing five clear routes to avert climate catastrophe and they all involve shifting from fossil fuels to renewables, it’s clear who the guilty parties are.

If we feel guilty and implicated in the system ourselves, then we’re far less likely to call out the real culprits. Because there are culprits in the fast fashion story: the government, which is failing to regulate the sector and the fashion brands themselves.

The UK Government is enabling individual fashion owners to cream off huge sums from retail and harm workers overseas.

If we’re serious about ending environmental destruction and exploitation in the fashion sector, then the buck stops with these two. Much of the clothes and footwear sold in the UK has been made by supplier factories on the other side of the world, including in Bangladesh and Cambodia. The long supply chains make it hard for consumers to know the quality of the conditions our clothes were made in.

In this supply chain arrangement, the retailers and brands hold most of the power – the supplier factories need their business. Nearly 85% of Bangladesh’s export earnings come from the ready-made-garment industry, for example.

This power imbalance was illustrated vividly during 2020, when COVID hit. Some household brands refused to pay for items already made and shipped, and some demanded discounts or delayed payment.

The long supply chains make it hard for consumers to know the quality of the conditions our clothes were made in (Picture: Traidcraft Exchange)

As Covid-19 swept across the world in early 2020, fashion brands were quick to respond.

Despite the fact that they had already placed binding contracts with suppliers in countries like Bangladesh, India, Cambodia and Myanmar, the charity I work for – Transform Trade – heard that some companies immediately sent emails demanding discounts, delayed payment terms or even outright cancellation.

Things like an 80% cut in the price, and payment only to be made in six months’ time were not uncommon.

For example, in June 2020, one Bangladeshi factory owner alleged that Topshop’s Arcadia Group had still not paid him for existing orders and that his factory would have to close within days, threatening thousands of jobs.

According to campaign group Clean Clothes Campaign, some workers in the garment supply chain still haven’t been paid wages owed to them from that time, and top brands have faced legal challenges over alleged human rights abuses during the pandemic.

This meant that some incredibly vulnerable people faced losing their jobs and subsequent destitution. Those that kept jobs had to work even harder, in more dangerous conditions. There were reports of workers being made to work longer hours for no extra pay, and of physical and sexual violence.

It’s only when fashion giants start treating their suppliers fairly, and paying them promptly, that the suppliers will be able to plan ahead and improve the terms and conditions of their workers.

And there is something we British shoppers can do about this. We can add our voices to the campaign for a fashion watchdog, something that takes less than a minute to do.

There’s already a watchdog for the supermarket sector, and in the years after this one was set up, supplier reports of abusive behaviour from supermarket buyers fell from 79% to 29%.

We know that regulation, backed up by suitable enforcement, works. By adding your name to the petition you’ll be helping push for a world where you don’t have to feel guilty, disgusted or angry when buying your clothes or reading the news.

I’d love to be able to shop for my next summer top and enjoy wearing it without a lingering doubt that a woman worker in Bangladesh has been paid a pittance to make it, or maybe even a child.

By adding our name to the call for a fashion watchdog we’ll be helping level the playing field for those retailers that do want to do the right thing and behave responsibly – without a regulator, these businesses get undercut by more ruthless operators.

Even before the cost of living crisis a third of British shoppers surveyed said they couldn’t afford to shop ethically. Now, with spiking energy prices pushing millions into fuel poverty, it’s unrealistic and unfair to expect British shoppers to solve ingrained inequality through their shrinking wage packets.


MORE : Women aren’t being ‘fashionable’ by talking about sexism – they’re fighting for their lives


MORE : ‘We’re not all working in sweatshops’: Asian seamstresses on working in New York’s fashion scene

The UK Government is enabling individual fashion owners to cream off huge sums from retail and harm workers overseas.